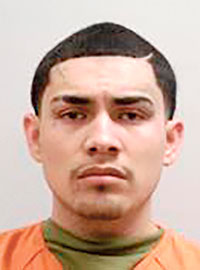 Garcia was arrested on Nov. 24 as a suspect in an armed robbery that occurred on Nov. 11 at Ankeny’s Mini Mart No. 1 at 1205 Oakland Place SE.

Court documents state that clerks told police that two masked suspects entered the store and demanded money. One of the suspects brandished a small pistol, which one of the clerks though might have been a BB gun. She handed him the money and the other suspect asked for a pack of Newport 100 cigarettes.

Surveillance video showed the first suspect, later identified as a 16-year-old juvenile male, enter the store first, followed by Garcia, who was carrying a gun. The video showed the clerk giving the suspects money from the cash register and two bank bags from behind the counter.

The juvenile suspect was arrested on Nov. 13 and told police he did not want to talk about the robbery until he knew what kind of “deal” he would get from the prosecutor. He also indicated he would identify the second suspect if the deal was “good enough.” While he agreed the video of the robbery showed that he was not the suspect with the gun, the juvenile was found to be in possession of a pack of Newport 100 cigarettes.

A review of Garcia’s criminal history shows prior convictions for theft and failure to appear on a felony charge as well as a conviction for “bail jumping” in Texas.

Garcia will be sentenced on June 13.

Kristin Lynn Stevens, 35, of LeRoy was sentenced to 10 years of probation for felony theft-take/use/transfer movable property without consent... read more