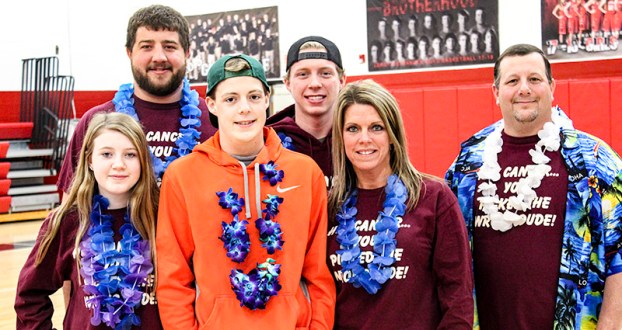 LEROY — Logen Meyer, 17, thought he was called back into LeRoy-Ostrander High School to talk about classes for next year. Instead, he was surprised with a trip of a lifetime.

Stepping inside the school gymnasium after following Principal Aaron Hungerholt, the LeRoy-Ostrander junior was stunned as he was greeted by the sounds of the Beach Boys music blasting in the background and the sight of 200 classmates donning Hawaiian shirts and leis.

In the front row were a couple classmates who held up a sign that said “Aloha Logen!” Standing along the wall were his parents, Brad and Brigette Meyer, and his siblings: brothers Taylor and Riley Meyer and sister Allison Meyer. 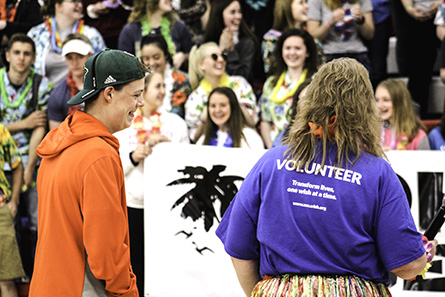 Logen Meyer, 17, and a LeRoy-Ostrander High School junior, takes in the surprise assembly that was put together for him on Tuesday afternoon by Make-A-Wish Minnesota.

Volunteers from Make-A-Wish Minnesota presented Logen with a lei, a Hawaiian shirt and some exciting news: His wish to go to Hawaii has been granted.

“I’m excited,” Logen said. “No one told me anything about this. I’ve had a lot of support from my parents and everybody really helped me a lot. It’s pretty cool how they set everything up. It’s awesome.”

Back in September 2018, Logen was diagnosed with cancer and was taking online classes at home during his treatments. Now healthy and having regained much of his strength, Logen is expected to come back to LeRoy-Ostrander High School next fall to complete his senior year. 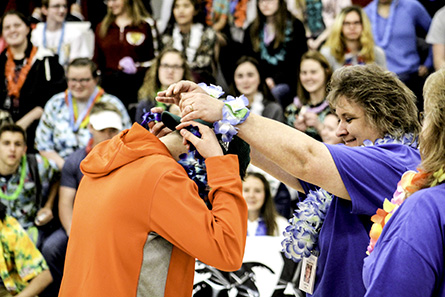 Logen Meyer, 17, and a LeRoy-Ostrander High School junior receives a lei from LeAnne Lenz, a local volunteer with Make-A-Wish Minnesota during a surprise assembly on Tuesday afternoon.

“He’s a teen with cancer, and it’s been tough for him,” Brad Meyer said of his son. “We received a lot of support from friends and family. It’s been a tough time, and he’s still got a long road ahead of him. We are looking forward to spending time together as a family.”

So, Make-A-Wish Minnesota got the ball rolling in getting Logen’s wish to come true. His ultimate dream: getting to experience a luau and scuba diving in the ocean. Having never seen the ocean, the teen will be traveling with his family to Hawaii this summer.

Describing Logen as a “very polite and pretty quiet kid with a wacky sense of humor,” his English teacher, Marsha Jevne, missed seeing her student in class after undergoing cancer treatments during the school year.

“He doesn’t hold it against me that I don’t like the Minnesota Wild,” Jevne chuckled. “Just knowing he’s healthy and will be coming back to school is the best thing. We want him back and see him in the hallways again. He went to prom and it makes us happy that he’ll back.” 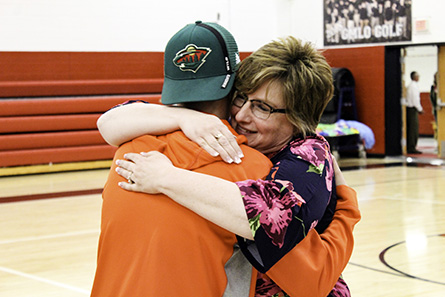 One of Logen’s friends, Logan Foster, a fellow LeRoy-Ostrander junior, expressed his excitement for Logen being able to have his wish come true.

“It’s awesome,” the teen said with a huge smile.

Getting to surprise Logen with this wish reveal was just what he needed after battling a tough year against cancer.

“He was just expecting to talk to the principal about his classes for next year,” Brigette Meyer said. “Now he gets to see the ocean, and do some snorkeling, experiencing a luau and see the fish. He’s never done anything like that.”

Make-A-Wish Minnesota is a nonprofit that creates life-changing wishes for children with critical illnesses and seeks to bring every eligible child’s wish to life because “a wish is an integral part of a child’s treatment journey.” Research indicated that children who have wishes granted can build the physical and emotional strength they need to fight their illness, according to the organization’s mission statement. 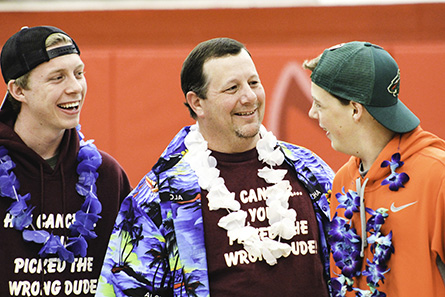 Since 1982, Make-A-Wish Minnesota granted more than 5,000 wishes to children statewide by generous donors, supporters, staff and more than 700 Minnesota volunteers.

“When a child is diagnosed with a critical illness, a family’s life gets turned upside down and everything else often takes a backseat to doctor’s visits and uncomfortable medical treatments,” said Mia Broos Hoagberg, president and CEO of Make-A-Wish Minnesota. “A wish come true helps a child regain the confidence, hope and strength that their illness may have taken from them.”

Having a wish fulfilled was something that meant the world to the Meyer Family. Brad and Brigette wanted to thank the community and school for coming together and showing their love and support for their son.

“We’re really grateful,” Brad said. “It means a lot and the school has been awesome. It’s amazing to see how everyone was coming together like that.” 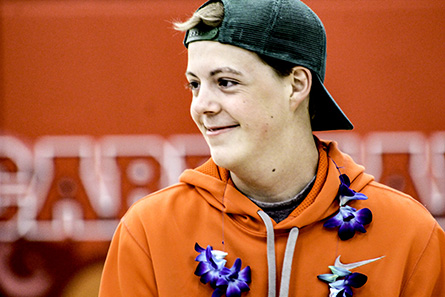