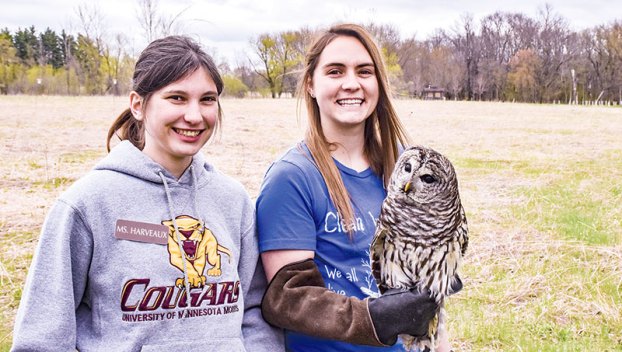 Left to right: Andie Harveaux and Kelly Bahl, are the two naturalist interns at the Jay C. Hormel Nature Center. Here, they’re taking Guka, a 14-year-old barred owl for his daily walk around the grounds. Photos by Hannah Yang/hannah.yang@austindailyherald.com

Where the wild things are, then you can probably find the Jay C. Hormel Nature Center naturalist interns too.

Kelly Bahl, 25, of Keokuk, Iowa, and Andie Harveaux, 24, of Albert Lea, both enjoy the great outdoors and hope to educate future generations on the importance of being good stewards of the environment.

Each day, the two interns are tasked with developing and leading environmental education programs for community members, with the main focus of working with children through eighth-grade. However, all ages are included in the different programs available through the nature center. They also serve as resources for people curious about any environmental subject, including identification and interpretation of the exhibits that are on display.

Not only that, Bahl and Harveaux are responsible for taking care of the living creatures such as birds of prey (including 14-year-old barred owl Guka), turtles, salamanders, frogs and even a snake. 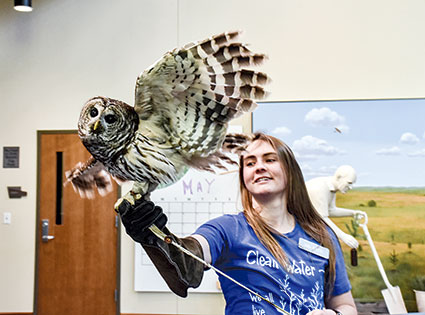 When Bahl was growing up, she never knew what she wanted to be. Many children at the time would go for being a firefighter, a police officer, doctor or lawyer, but those occupations weren’t really in the forefront of her mind.

The University of Northern Iowa alumna never knew exactly what career she wanted to go into, but she has always an outdoors kind of person. When the opportunity came for an internship at the nature center, Bahl decided to pursue it. Now, she’s more than certain that she wants to continue working at nature centers to help promote outdoor education.

Not having much experience with animals, Bahl was immediately thrown into the ring with all the responsibilities of what it meant to be an environmental educator. Now, she’s able to handle creatures and answer questions on a variety of topics with ease.

“It’s really getting a baptism by fire,” Bahl said. “You get your boots dirty. You’re thrown right into it, and so you better learn type of thing.”

From conducting classes with younger children, to helping tap maple trees for syrup and calling for chickadees out in the wild, there’s never a moment where Bahl gets bored. She wishes there were more hours in the day to finish all the tasks that are in front of her, and finds outdoors education to be an integral part of how people learn more about the world around them.

“If you don’t know, you’re intimidated,” she said. “You won’t grow as a person.”

One of the things that Bahl hopes to continue is to promote the Sola Fide Observatory and conduct more nighttime opportunities for the community to utilize the resources that are available to them in Austin. She even wrote a grant and received $500 for a computerized telescope for people to use that maps out the night sky.

“Not many small towns can say they have their own observatory,” she said. “I want to see the community embrace it more, and see it used more.”

Although it’s not for certain what Bahl plans to do once her internship is completed, she would like to continue teaching environmental education in the Midwest.

“I’m really open to a lot of things,” she said. “It’s something that the universe puts into your lap. I want to take the opportunity and see where it can take you. I’m open to it.” 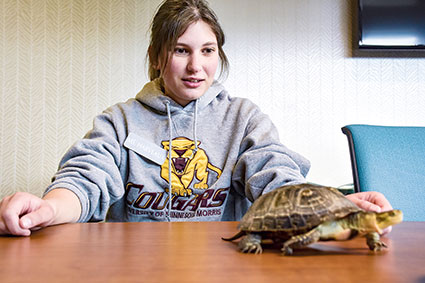 Andie Harveaux watches a Blanding’s turtle make its way across a table, which is considered an endangered species in Minnesota and resides at the nature center.

Probably Harveaux’s favorite thing to do at the nature center would be working with birds of prey. She never imagined working hands-on with the raptors has much as she has been, but it was an experience that would prove to be priceless.

“Raptors are more complex than I could have ever imagined,” the graduate from the University of Minnesota-Morris explained. “From their anatomy to their behavior, I came in with my own assumptions. It’s very different now, thanks to the opportunities I have here.”

Working with the various birds such as the two hawks and Guka have proven to spark an interest for Harveaux. She developed greater levels of trust in the birds and enjoys the excitement that comes into children’s eyes, amazed at seeing some of the creatures in person.

Doing so, helps dispel some of the stereotypes and misconceptions surrounding creatures like snakes.

“It’s really cool,”  she said. “I love seeing them get excited and they find something to connect with. I love hearing them say ‘it’s so cool.’  They feel a snake for the first time, and their initial fears are melted away. I love encouraging them.”

Working together with Bahl has helped Harveaux see the importance of their contributions to the Jay C. Hormel Nature Center. By connecting the bridge between people and nature, more people will begin to see how everything is connected.

“I want to help educate kids about what we share the world with,”  Harveaux said. “We don’t need to fear them, and they’re not as bad or scary as some may think. We want to show kids and to help them have that understanding regarding nature.”

However, her experiences at the nature center have cemented Harveaux’s passion for nature and environmental education.

“It’s been an absolutely fantastic experience,”  she said. “I’ve gotten to work with amazing people and I can never thank them enough.” 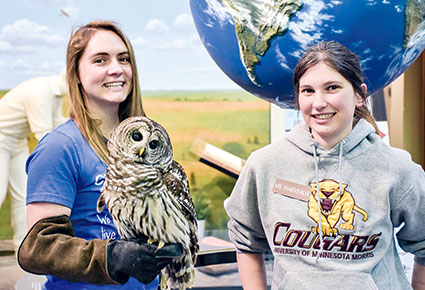 From left: Kelly Bahl and Andie Harveaux are this year’s two naturalist interns for the Jay C. Hormel Nature Center. Posing with them is 14-year-old Guka, a barred owl. Hannah Yang/hannah.yang@austindailyherald.com

Holly Johnson: Gardens of the Hormels

When I moved to Minnesota I remember being told that it’s best to wait until Mother’s Day before planting outdoors... read more