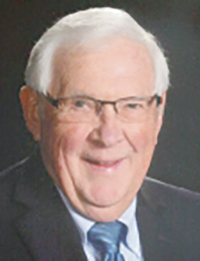 Jerome “Jerry” LeRoy Leif, 74, passed away peacefully on Monday, April 22, 2019, at home surrounded by his family.

Jerry was the eldest of Claude “Bud” and Alice Mae’s 11 children (Georgia, Paul, Keith, Fr. Greg, Larry, Joe, Don, Dan, Mary and Steve). Raised in Austin, Minnesota, he graduated from Pacelli High School before going on to receive his associate degree. Jerry honorably served his country in the U.S. Army, including service in the Vietnam War. Jerry initially joined IBM in their offices in Rochester, Minnesota, then went on to work for them in Milwaukee, Wisconsin. He was an accomplished salesperson with many awards and inclusion in the company’s honorary Golden Circle and 100% Club. He was always a positive role model and friend to co-workers, as evidenced by the strong bonds he still had with his colleagues from IBM, Great Lakes Packaging, and American Paper and Packaging. He met his wife, Betty, in the first grade and they were married in 1968. They had a fairytale love story and raised their two sons and daughter in Greendale, Wisconsin. As one friend described it, “BettyandJerry” was always one word. Jerry would playfully tease Betty and she would say, “Oh Jerry,” with a smile. They traveled the world together hand in hand for years and celebrated their 50th wedding anniversary last summer in Lake Tahoe together with their families. A faithful and devoted Catholic, Jerry often attended daily Mass. Most recently, he was a member of St. Joan of Arc in Nashotah, Wisconsin, where he was an active member with the St. Vincent de Paul Society. He was always volunteering in the community and served as a board member of Friends of Autism and co-chair of the Annual Golf Outing for 15 years, helping to fundraise for research and awareness of autism. Jerry’s most important job was being a hands-on husband, dad, and grandpa. He taught everyone in the family how to live fiercely, treat everyone with respect, live faithfully, love greatly, and play a mean game of golf and cards. He had a cheering squad of nine grandkids that loved him to the moon.

A liturgy of Christian burial will be held at 4 p.m., on Friday, May 3, 2019, at St. Joan of Arc in Nashotah with the Rev. Michael Strachota and Father Gregory Leif, Jerry’s brother, officiating. Visitation will be held for two hours prior to the service on Friday at the church. In lieu of flowers, memorials in Jerry’s honor are suggested to St. Joan of Arc Parish, 120 Nashotah Rd, Nashotah, WI 53058, or Friends of Autism at www.friendsofautism.org/Donate-Now.

A family-owned Mexican restaurant that started in Austin is adding a new location in Albert Lea adjacent to the Shell... read more