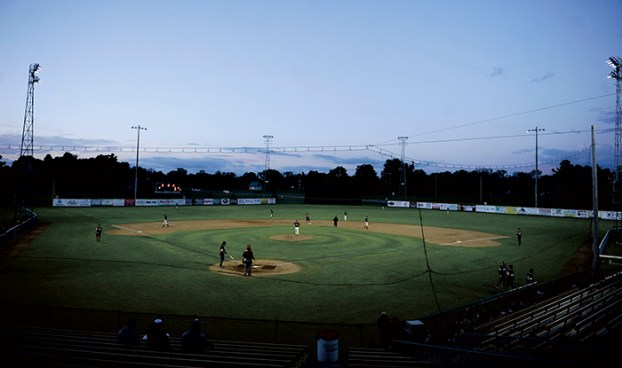 Hulne: Marcusen Park has a big stretch on the horizon

When Kathy Serratore of Austin is spending her time at the concessions stand at Marcusen Park, she often finds herself steering her attention away from the game and towards the children.

If there was an ideal place for children to run free and let loose, it may just be at Marucsen Park on a nice sunny day. The Park, which was originally built in 1948, has now stood for 15 years since the Marcusen Park Board stepped up and kept it from being destroyed.

Kathy and her husband Joe have been active, along with many others in keeping Marcusen alive over the last decade and a half.

“The main reason why I have been a volunteer for these years is it is one of the few places where kids can come and run around, get dirty, chase after foul balls and just have fun,” Kathy said. “There’s always somebody watching them. There’s not too many places where kids can do that freely. It’s a safe place for kids to hang out. They might come with friends or meet kids and that’s fun.”

Not too long ago, one of those kids was Austin head baseball coach Joe Kroc, who spent many of his younger days at Marcusen. Now Kroc is hoping to drum up a little more Marcusen Park magic as he will lead the Packers into the Section 1AAA Tournament. Austin will likely host games at Marcusen at 1 p.m. this Saturday and on May 28. Marcusen Park will serve as the host site for the final four of Section 1AAA on June 1 and June 4.

“I think it’ll be a pretty neat venue for us. That’s where I grew up as a little kid watching baseball and eventually I played baseball there for years and years,” Kroc said. “I think it’s good for baseball in general in Austin. For us to have a chance to hopefully play into that last Saturday or Tuesday would be a pretty cool setting for us to hopefully be playing our best baseball.”

Austin plays its VFW and Legion baseball games at Marcusen in the summer, but it’s been at least a decade since Austin High School has played a baseball game at Marucsen. Lyle-Pacelli uses Marcusen as its primary home field and it will host Glenville-Emmons/Alden-Conger in a postseason game at 5 p.m. today.

Marcusen Park has hosted thousands of baseball games over the years, and it’s also been a place for grad party, weddings, and concerts over the years. The stadium has stayed open due to the help of legions of volunteers who have put in their time or hard work, including Gabby Weiss, John Morrison, Ron Ripley, Louise Berhow, Brock Meyer, Rolf Bollingberg, Josh Kunze, Joe Kroc Sr., Matt Cano, Mark Conner, Terry Rhone and Todd Zynda.

The man behind Marcusen has been Mike Goetz, who has helped out in all areas of the park. He’s also worked to install many of the recent upgrades to Marucsen.

The next week will be a big one for the venue, which once hosted sellout crowds on a regular basis. Plenty of new fans may be seeing Marcusen for the first time ever.

They’re likely to leave with some good memories of some fun baseball, and maybe there will be some kids who get to run around and chase foul balls for the first time in their lives.

BLOOMING PRAIRIE — Blooming Prairie junior Riauna Bishop threw over 100 pitches with her team’s season on the line, but... read more