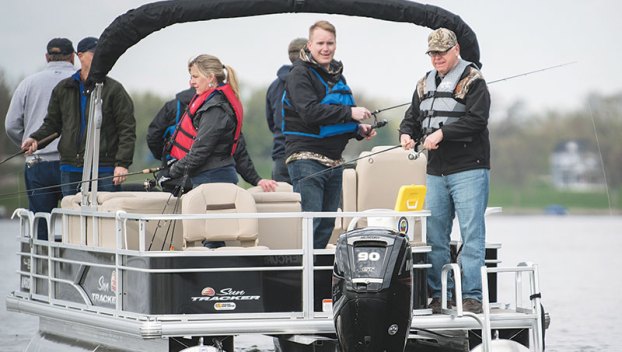 ALBERT LEA — After months of preparation, Albert Lea kicked off Saturday morning with the marquee event of the Governor’s Fishing Opener weekend — the fishing.

While some fishermen had been out on the water since the early morning hours, Gov. Tim Walz officially started the day with the opening ceremonies at 8 a.m. in Edgewater Park.

As hundreds of fishermen and spectators from around the area gathered at the park, many community leaders joined Walz, including Mayor Vern Rasmussen Jr., Shell Rock Watershed District Administrator Andy Henschel and Albert Lea Convention and Visitors Bureau Executive Director Susie Petersen on the stage to praise all the work Albert Lea has done to make the event happen.

“We couldn’t have asked for anything better,” Walz said. “The Visitors Bureau, the Chamber of Commerce, well done on the weather, well done on pretty much everything we’ve seen over the last few days. It is the kickoff of summer. A chance to showcase what makes Minnesota so unique and what makes this such a great state.” 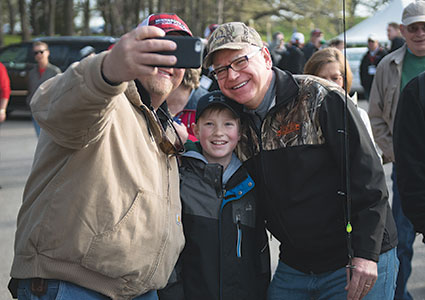 Gov. Tim Walz poses for a picture before Saturday’s launch ceremony at Edgewater Park during the Governor’s Fishing Opener weekend.

Walz had many thank yous for everyone in attendance and the people who have been a part of putting the weekend together.

Lt. Gov. Peggy Flanagan was also in attendance and talked about how the fishing opener was a point of emphasis for her on the campaign trail.

“I am so thrilled to be here at our first fishing opener,” Flanagan said. “This is one of the things we talked about, I don’t want to get political, but I do want to say this, one of the things that we talked about on the campaign trail. We’re like, ‘If we can just pull this off, we get to go to the fishing opener,’ and it was a bright light for us.

“Albert Lea has just rolled out the buffalo-plaid carpet for us and we are so grateful. The community has been so welcoming, the volunteers; it’s just really been better than I could have ever imagined. Albert Lea has set the bar for every fishing opener for us moving forward.”

Flanagan mentioned that one of every three Minnesota residents have gone fishing in their lifetime, making it second in the nation. According to Walz, the fishing and tourism industries bring a lot of revenue to the state, with fishing alone bringing in $2.5 billion to the economy and tourism adding another $15 billion.

“It’s who we are, it’s our culture,” Walz said. “People come here, we embrace our true north, and they love to see that. We just came through a hard winter that most of us smiled about, but we always knew at the end of those long, dark, cold, snowy nights this was waiting for us.” 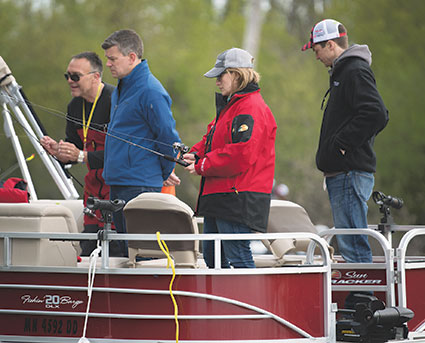 While all that was left was to put the line in the water and relax, Walz and Flanagan still had a bit of work to do. A friendly wager was placed between the two on who would catch the most fish with the winner receiving a 2-liter of soda. Both Walz and Flanagan were depending on their hosts to help them find the best fishing spots. Bryan Skogheim hosted Walz and Mike Peterson hosted Flanagan.

“For me, it’s an honor to have the governor in my boat,” Skogheim said. “I’m excited to get out fishing. I don’t think there’s much competition between Mike and I. We both love being on the water and love fishing. We’re just going to show the lieutenant governor and governor what our lakes have to offer.”

While there were many boats taking off from the docks along Edgewater Bay after the ceremony, some fishermen decided to stick to the shore to do their fishing.

Albert Lea resident Alan Drescher said he usually celebrates the opener by just fishing the lakes in Albert Lea. Drescher said he had been fishing since about 6 a.m. and had only caught bullheads so far, but as long as the weather was nice, he was happy.

“It’s just nice to be out,” Drescher said. “The cold front that went through on Wednesday and Thursday that took care of the fishing, but it’s just good to be here. The fresh air, being outside and the people, there’s a lot of good people.” 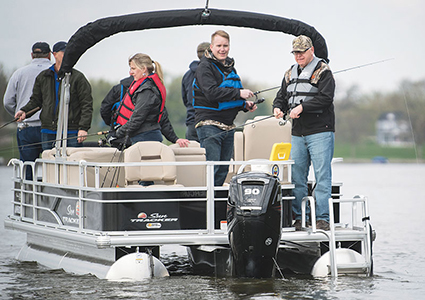 The opener will be held May 7-10, 2020. Thumper Pond Resort will serve as event headquarters.

Explore Minnesota, the state’s tourism promotion office, organizes the annual event along with a host committee. The 73rd annual Governor’s Fishing Opener will be hosted by a committee of volunteers from Otter Tail County.

The Governor’s Fishing Opener has been a Minnesota tradition since 1948 and serves as the kick-off celebration of the summer tourism season.

The Hayfield baseball team picked up a pair of wins as it beat Lyle-Pacelli 7-2 and topped United South Central... read more