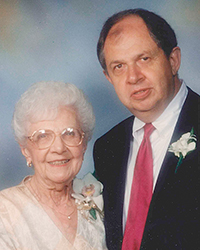 Calvin Marvin Olson, 81, formerly of Austin, Minnesota, passed away unexpectedly at his home in Framingham, Massachusetts, on Tuesday, Dec. 19, 2018.

Glenda was born on March 25, 1915, in St. Ansgar, Iowa, to Fred and Ella (Schmidt) Brandt. She grew up on the family farm and had one brother, Marvin, who died at a young age. She attended elementary and high school at Otranto, Iowa, graduating in 1933. Following high school, Glenda chose to stay at home to help her mother; she enjoyed a carefree life attending local events and meeting new friends. It was during this time that she met Robert L. Olson, who was eight years older. They fell in love and were married in 1935. They lived in St. Ansgar until 1940, when they moved to Cedar Rapids, Iowa. In 1947, Robert and Glenda moved to Austin, where he formed his own construction business called R.L. Olson Construction Company.

Glenda kept busy with the company bookkeeping and assisted Robert in any way she could. Together, they had one son, Calvin, who was the joy of their life. They had many friends and enjoyed their leisure time playing golf and socializing. Glenda loved playing Bridge and doing stitchery as well.

After Robert’s passing in 1984, Glenda continued to live in her home until 2015, when she moved to The Cedars.

Glenda is survived by many nieces and nephews and their families; and lifelong friends, Nels and Shirley Golberg of St. Ansgar.

She was preceded in death by her parents; husband, Robert; son, Calvin, in 2018; and brother, Marvin.

Calvin was born on Jan. 14, 1937, in Austin to Robert L. and Glenda (Brandt) Olson. He graduated from Austin High School and went on to graduate from the University of Minnesota School of Architecture with a Masters degree. He studied for two years in Arizona under Frank Lloyd Wright. Calvin spent his career on the east coast in architectural building design.

Calvin’s parents, Glenda and Robert, were so very proud of their son’s progress in life. He is now eternally united with his parents and his uncle, Marvin.

Funeral services will be held at 1:30 p.m. on Thursday, May 23, 2019, at Clasen-Jordan Mortuary with the Rev. Dr. Joy K. Bussert officiating. Visitation will be one hour before the service on Thursday at the funeral home. Interment will be in Immanuel Lutheran Cemetery in St. Ansgar. In lieu of flowers, memorials are preferred.