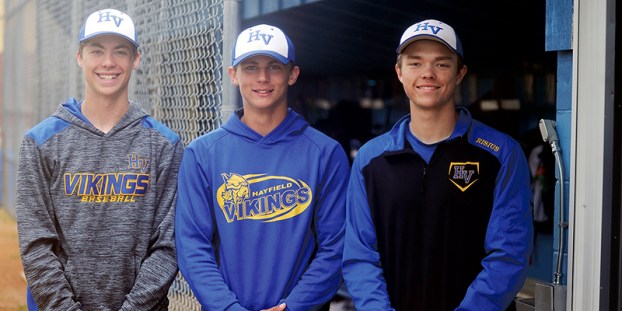 From left: Brady Nelson, Easton Fritcher and Jake Risius have all stepped up for the Hayfield baseball team this spring. The Vikings are two wins from their first state tournament apperance in school history. Rocky Hulne/sports@austindailyherald.com

Siege Engine: Vikings carry a deep pitching staff into the Section 1A Tournament

HAYFIELD — When it comes to playoff baseball, head coaches often find themselves stressing over throwing their ace in as many games as possible without breaking the pitch count rule.

That’s not a problem for the Hayfield baseball team, which is just two wins away from its first state tournament appearance in program history. The Vikings have a wealth of hurlers who can take the ball in a big moment and escape a jam.

The Vikings have two clear standouts at the top of their rotation in freshman Easton Fritcher, who is 7-0 with an 0.827 ERA and junior Brady Nelson, who is 8-0 with a 1.641 ERA, but head coach Kasey Krekling said he feels comfortable with any of his top six or seven pitchers on the mound.

“Our pitching staff has been lights out most of the year. Some of our four, five and six guys would probably get a lot of innings at other places, but they don’t for us because we have a lot of depth,” Krekling said. “It’s by far the deepest pitching staff I ever had and most of them come back next year. Our JV had a really nice year too and there will be a lot to fight for next year.” 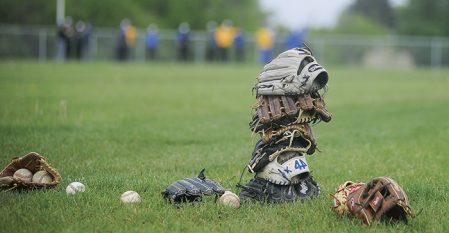 The Hayfield baseball team has made some big strides this season and the Vikings are hoping to earn their first trip to the state tournament this spring. Rocky Hulne/sports@austindailyherald.com

Nelson has come into his own as a pitcher this season, but he’s not looking over his shoulder when he sees Fritcher getting big starts.

“We fire each other up. We take it as a team and it’s not about the stats,” Nelson said. “We’re just going out there trying to get the win.”

Hayfield (20-2 overall) has won 14 in a row and 20 of its last 21 games and the team has maintained a sharp focus despite having just one senior in the lineup in shortstop Mason Tapp. The Vikings have trailed in each of its Section 1A West victories last week, but they were able to bounce back and win both games comfortably.

The Vikings are certainly playing with confidence, but Krekling doesn’t want his team to play overconfident when top-seeded Hayfield takes on Spring Grove (15-6 overall) in the Section 1A Tournament at 10 a.m. Saturday, at Riverland Community College.

Jake Risius, a junior who catches and pitches for Hayfield, was brought up to the varsity team as a freshman and he’s been hoping for a spring like this one since he started playing baseball.

“Baseball is like a year round thing for us. It’s not just during baseball season where we play baseball,” Risius said. “The teams before us had a lot of success and they’ve given us something to strive for.”

Hayfield has a team that isn’t just motivated, it is also dedicated. Krekling said many of his players consider baseball their number one sport and plenty of the Vikings volunteer their time to coach or umpire youth games, while also playing in the summer time.

That dynamic has left Hayfield with a deep pitching staff that isn’t going anywhere for the next two seasons. Fritcher said that pitching depth is a huge bonus for a team that has some big goals.

“We throw a lot of strikes and we have a very good defense and that helps keep our pitch count low,” Fritcher said. “Even if we do have a higher pitch count, we have plenty of guys to back us up.”

If Hayfield beats Spring Grove, it will advance to Tuesday’s Section 1A final and it will have to win just one game to advance to state. If The Vikings fall to Spring Grove, they will play the winner of Lyle-Pacelli and Southland at 12:30 p.m. Saturday and they will be three wins from state.