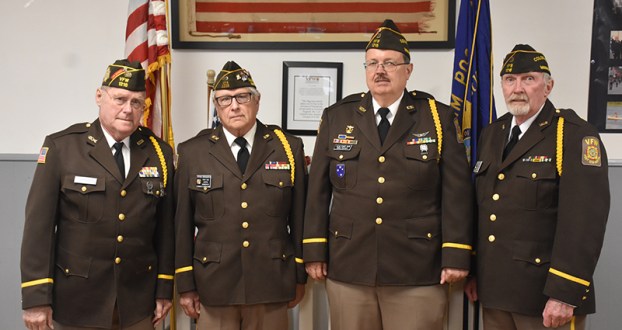 As Memorial Day approaches, veterans’ organizations throughout the country are busy preparing to honor fellow service members who have passed away.

But 2019 also marks 55 years since the passage of the Gulf of Tonkin Resolution, an act that gave President Lyndon Johnson authorization to use military force in Vietnam without a declaration of war. The ensuing Vietnam War split the nation during a time of great social upheaval, and many Vietnam veterans, both living and dead, did not receive the recognition bestowed on veterans of other wars on days like Memorial Day and Veterans Day.

But as time healed the division, recognition for Vietnam War veterans has increased. This Memorial Day, the Veterans of Foreign Wars Post 1216 Color Guard will join members of American Legion Post 91, American Legion Spam Post 570 and the Disabled American Veterans Post 27 in remembering those veterans in the Austin area who have since passed on.

“I think it’s a great privilege,” said Color Guard member Ron Grosland, a Navy veteran. “All of the veterans, regardless of where they served, even if they didn’t serve in a war, should be honored.”

“I’ve got a really good bunch of guys on my Color Guard,” said Color Guard Commander Ron Hanson, an Army veteran. “They are really for honoring the memories of our fallen comrades.”

Both Grosland and Hanson are Vietnam War veterans. Grosland served aboard the aircraft carrier USS Ticonderoga and was deployed to the Gulf Of Tonkin three times from 1966-69.

“I consider myself very lucky being on a ship and not being on the ground on actual Vietnam soil,” he said. “I have a high regard for those who were (on the ground).”

Despite being on a ship, Grosland knew some who did not make it home.

“The best man at my wedding was shot down over North Vietnam in ’72,” he recalled. “My original officer-in-charge was doing an exercise at night and his plane went down in the ocean and he was killed. They tried to rescue him with a destroyer, but there were too many sharks so they couldn’t get into the water.”

Hanson served with the 572nd Engineers from 1966-67. He remembered the monsoon weather more than anything,

“I remember being wet so many days in a row,” he said. “My socks never dried out and I was certainly happy to get back to dry land.”

While Hanson did not say a whole lot about being in Vietnam, he said he looks back on his tour of duty as “a good experience.”

“When we came back, we were not looked upon too highly,” he said. “I think now people have realized that we were 18, 19, 20-year-old kids taking care of the United States of America’s security.”

Stephen Dorenkemper, who also serves on the Color Guard, served in the Navy on active duty from 1968-72, then in the Reserves until 1991. While in Vietnam, he was stationed aboard the USS Hector, a Vulcan-class repair ship that did work on destroyers in Đong Tâm. Fortunately, he did not know anyone who was killed.

“One time, I remember, a destroyer came in with a hot round in it, so we had to go to general quarters until they removed it,” he recalled, a “hot round” meaning a round that did not go off in the barrel that could possibly explode. “That was about the hairiest thing that happened.”

Michael Hansen, another member of the Color Guard, served with the 71st Assault Helicopter Company stationed in Chu Lai. Like Dorenkemper, he did not know anyone who was killed in Vietnam, and extremely fortunate outcome given the combat he saw.

“It’s a beautiful country over there, but when you haul troops into the middle of nowhere and you don’t know what’s sitting out there waiting for you, you ran into some bad stuff sometimes,” he recalled. “If we were flying troops, we knew we were going into some serious areas.”

In 1971, two months after Hansen’s unit arrived in Vietnam, they moved into Quang Tri and participated in Operation Lam Son 719, the largest helicopter excursion in the Vietnam War.

“We flew troops into Laos and the helicopters got shot up really bad,” he said. “We had a crew that was shot down and was on the ground for three hours before we got them out of there. They had North Vietnamese soldiers running all around them.”

“Vietnam was an experience I’ll never forget,” he added.

The return home varied for the four of them. Dorenkemper and Grosland had normal experiences upon arriving in the United States.

“I flew into Rochester, my dad picked me up, and that was it,” Dorenkemper said. “I had my uniform on and they didn’t say nothing to me.”

“I never had any problems, but I knew a lot of people who did,” Grosland said.

Hansen was not so lucky.

“I had some nasty stuff happen to me,” he said. “I had some friends who were going to the University of Minnesota that gave me a hard time. I walked out on them and told them I didn’t need to hear it. Since then, they’ve all apologize to me and thanked me for my service, but back then, it was pretty hurtful to come back and have to listen to that.”

Today, all four work with other members of the Color Guard to honor the memories of deceased veterans.

“I really enjoy (the Color Guard),” Dorenkemper said. “I’m proud to be on it.”

“To me it’s a pleasure and an honor to honor my fellow veterans,” Hansen said. “It’s such a privilege and I just love it. I can’t say enough good about the services we provide for the families of the veterans that have died.”

As they honor deceased veterans this Memorial Day, the memories of their fellow Vietnam veterans will be on their minds.

“I’m sorry for the friends I lost over there,” Hanson said. “They gave up their lives for this country. When you sign your name on that paper, you say you will give your life up for your country to protect it, and we did.”