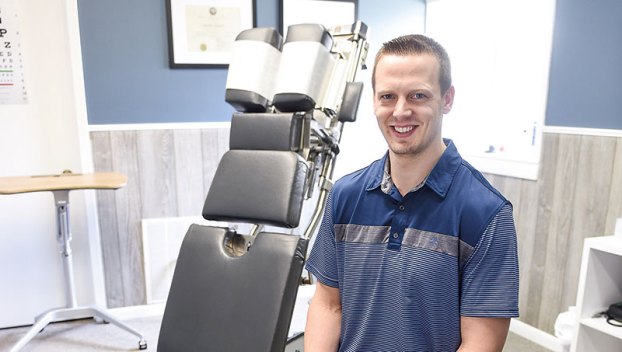 After spending some time working for Bollingberg Chiropractic, Cody Kirkpatrick is returning to his roots in Adams where he has recently opened his own practice. Eric Johnson/photodesk@austindailyherald.com

While growing up in Dexter, Dr. Cody Kirkpatrick, DC, knew he wanted to work in the health care field. But after majoring in athletic training at Luther College, the Southland High School graduate had to figure out what to do next.

“I shadowed physical therapists and chiropractors and I liked how the chiropractic field was hands on,” he recalled. “I liked that you could set up the office as you wanted, and growing up, I had some help from chiropractors and had a good experience with it.”

After going to chiropractic school at Northwestern Health Science University, Kirkpatrick worked for chiropractors in Austin and Kasson.

On March 1, Kirkpatrick became his own boss when he opened K Chiropractic in Adams. 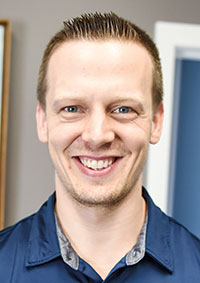 “We’ve lived in Adams for the past four years,” he said of himself and his family. “Growing up in the community, I’ve always loved it. I love being back down in the area again. I’m a small town kind of guy.”

But the choice to open in Adams was not only attributed to Kirkpatrick’s love of the community. Adams has been without a chiropractic office for several years and Kirkpatrick saw the opportunity to fill the need.

“It’s a smaller community, so you get to know everyone,” he said. “Being known in the area helped; people asked me when I was opening cause they were eager to have a new business in the area to support. Having that support has helped me get going. It’s been really good.”

Kirkpatrick said he gets patients from all over the area, including several clients he had while in Austin and Kasson.

While opening a new practice has its challenges, Kirkpatrick said the benefits are worth the risk.

“When opening a new business, it’s exciting and kind of scary because it’s all on you, but you can build it the way you want to,” he said. “Having a family, it will be nice to block off some time to see one of my kid’s concerts or sports games. That’s one of the main benefits.”

K Chiropractic will be hosting an open house from 4-7 p.m. on Tuesday, June 4. Food will be served and all who are interested are invited to check out the new clinic.

“I like developing relationships and I want people to know I’m here to help,” Kirkpatrick said. “My goal is to help people achieve whatever goal they want to achieve.” 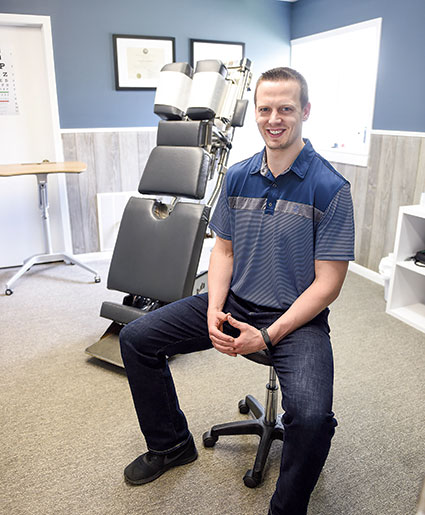 After spending some time working for Bollingberg Chiropractic, Cody Kirkpatrick is returning to his roots in Adams where he
has recently opened his own practice.
Eric Johnson/photodesk@austindailyherald.com

A 13-year-old Mower County resident was taken into custody Thursday night after allegedly fleeing police in a stolen vehicle. According... read more