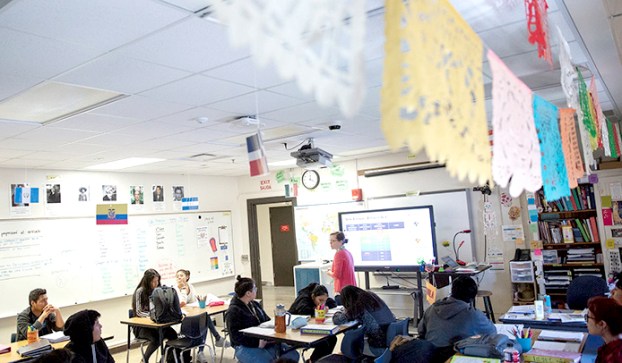 Spanish teacher Marni Ginther goes over information about the seal of biliteracy test during class on April 23, 2019, at Edison High School. The seal of biliteracy is awarded to graduating high school students who demonstrate proficiency in a language in addition to English. Christine T. Nguyen | MPR News

In addition to their caps and gowns, some of the high school graduates crossing commencement stages this spring will have an unusual and honorary distinction: the seal of biliteracy.

It’s an award granted to graduating students who demonstrate proficiency in another language, in addition to English.

To qualify for the seal, students must take a test — and if they pass, they don’t get just a fancy certificate from the Department of Education. They’ll be able to earn up to four semesters of college credit recognized by Minnesota State Colleges and Universities.

“We’re trying to use it as an imperfect tool to get some academic recognition and possibly some college credit for these students who are often viewed as being at a deficit,” said Marni Ginther, a Spanish teacher at Edison High School in Minneapolis. “They’re often defined within the system by what they don’t have, what they don’t bring. And we’re trying to create a space where they can have the opportunity to bring something.”

That’s good news for many reasons. Research shows that bilingual students are better at solving math and word problems. They have improved social and emotional development. Their brains are more flexible and active. Babies raised in bilingual households have even been shown to demonstrate better self-control.

But the U.S. school system is not always set up to view biliteracy as an asset. World language is often only taught in high school. And while it’s the norm in other countries for students to graduate high school biliterate, it’s much more unusual in the United States.

Salah Mohamed got his biliteracy seal after taking the Somali test. He’s a senior at Edison and grew up speaking Somali with his parents, but has never learned the language in a classroom setting.

He said that proving he knows Somali was important to his family and it was a validating experience to see how much he actually knew. It encouraged him to keep investing in the language.

“I don’t know what I’ll be in four or five years’ time,” he said. “I may need Somali, I may not. But there’s always going to be chances where you can improve your Somali, and I’ll always do that.”

This sort of program is not new. It was legislated in Minnesota in 2015, and this state is one of dozens that have it.

But Minnesota’s approach stands out. It’s one of only two states to offer college credit for the seal. And it also offers the program in more languages than almost anywhere else.

Kristin Davin, an assistant professor at the University of North Carolina, is an expert on teaching foreign languages. She’s always considered Minnesota a pioneer in bilingual education. She’s been making trips here to study the impact the program is having.

Minnesota is a model, she said, of how to handle the seal of biliteracy.

“By providing them a credential and giving them credit for knowing another language, that can make college much more accessible because it can reduce the cost … which could be a big deciding factor for someone in whether they go to college or not,” she said. “And also they can get high school credits for it … so they might have a little bit of space in their schedule to take something else. So, it’s just really validating and has a lot of potential benefits.”

Minnesota’s education commissioner, Mary Cathryn Ricker, is a champion of the program. She wants to see it grow.

“I would love to see a day where our local job applications ask if they’ve received their diploma, and do you have a seal of biliteracy in any language?” she said. She’d also like to see the seal offered to bilingual prison inmates who are earning high school and college credit behind bars.

Ricker said there’s also demand to offer the seal program in a wider variety of languages. The test is already offered in languages like French, German, Spanish and Hmong. And efforts are underway to develop tests for speakers of Dakota, Ojibwe, Lao and Cambodian.