Austin man charged with threatening woman with knife; Was allegedly ‘drunk and angry’ 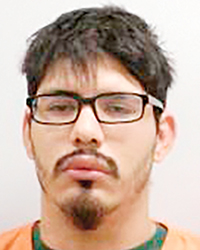 According to the court complaint, an officer responded to a call of a domestic assault involving a knife at 10:43 p.m. on Sunday at a residence in the 2000 block of Third Avenue Northeast. When the officer arrived, a 2014 Chevrolet Silverado was seen leaving the residence. The officer took down the plate and attempted to contact someone in the residence. When no one answered, the officer entered the residence to make sure no one was hurt or unresponsive. He then ran the plate number, which came back as owned by Ambriz-Raya.

The officer spoke to a woman at the residence who appeared frightened and apprehensive about speaking. She told the officer she and Ambriz-Raya got into an argument at the Third Avenue Northeast residence. She described him as “drunk and angry” and said he threatened her with a knife when she said she was going to the home of a relative, telling her, “Don’t make me do something that I’ll regret.” She texted her relative, who came by the residence to pick her up, and Ambriz-Raya arrived at the residence 10 minutes later.

Ambriz-Raya was placed under arrest for domestic assault. While at the Mower County Jail, officers had him perform several field sobriety tests, all of which he failed. A breathalyzer test showed Ambriz-Raya had a blood-alcohol concentration of 0.12.

Ambriz-Raya admitted to police that he and the victim had been arguing and that a relative had picked her up and brought her to the residence on Fifth Avenue Northeast, but denied driving to that residence.

The responding officer returned to the Third Avenue Northeast residence with the victim, who pointed out the knife Amriz-Raya used. The knife was collected as evidence.

Ambriz-Raya will appear in court again on June 6.