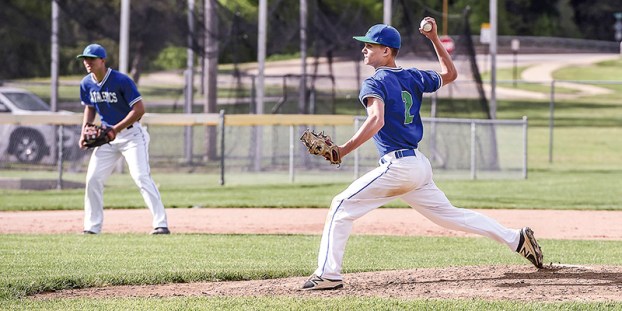 The No. 3 seed Lyle-Pacelli Athletics survived a scare against a team it had swept by combined score of 26-2 in the regular season in the Section 1A West Tournament Wednesday, at Marcusen Park.

LP had to come up with some clutch pitching in the late innings and then its bats did the work to beat Glenville-Emmons/Alden-Conger 9-4 in an elimination game.

GEAC (6-13 overall) was within 4-3 and it had runners on first and third with one out in the top of the sixth inning when LP catcher Tanner Murphy caught a runner stealing for the first out and pitcher Jed Nelson picked up a huge strikeout to end the rally.

“I focused on keeping my form and technique good,” Nelson said. “I couldn’t just go out there and just chuck. I had to have good lower body control and I had to throw strikes.”

LP tallied five runs in the bottom of the sixth to put the game away as Cory Webber doubled in two runs and he scored on a suicide squeeze bunt by Bryce Strouf. 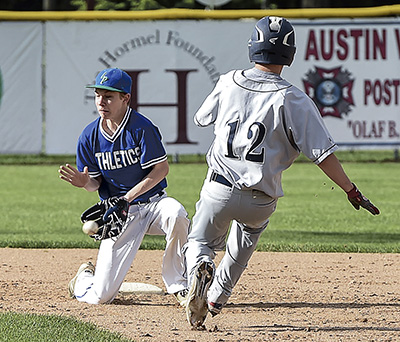 Lyle-Pacelli’s Jayden Lewis tries to take in a throw from home on a Glenville-Emmons stolen base attempt by Tyler Lair in the Section 1A West Tournament Thursday at Marcusen Park. Eric Johnson/photodesk@austindailyherald.com

LP(12-8 overall) also had to throw Zach Bollingberg, who allowed one earned run in five innings, but he and Nelson should be available when LP takes on No. 2 United South Central in Riverland at 10 a.m. Saturday as both pitchers threw less than 75 pitches.

“I wasn’t expecting the game to go that long. They played a good game and we hit the ball hard at them a couple of times and they made plays. It’s playoff baseball and you’ve got to have pitchers,” LP head coach Brock Meyer said. “I think it’s better for our pysche that we had a little bit of pressure there at the end. That was good for them, because you’re going to have to make certain plays like that in the playoffs.”

Bollingberg, who had two RBIs in the win, knocked in a run in a three-run first inning for LP. He said the Athletics need to find and keep their intensity early on in the upcoming postseason games.

“Everybody comes to play in the playoffs,” Bollingberg said. “We’ve got to come out with our best every single game. We’ve got to have more focus at the beginning of the games. If we can do that, we can beat anybody in our section.” 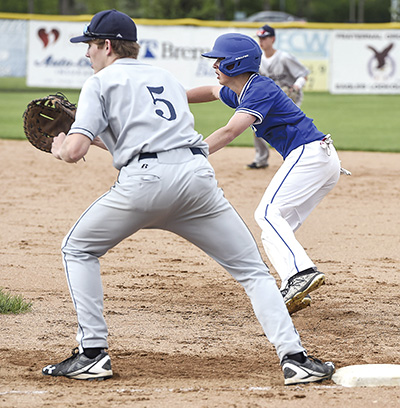 Lyle-Pacelli’s Cole Walter takes a lead from first against Glenville-Emmons/Alden-Conger in the Section 1A West Tournament Thursday at Marcusen Park. Eric Johnson/photodesk@austindailyherald.com

Lyle-Pacelli third baseman Jed Nelson throws across his body against Glenville-Emmons/Alden-Conger in the Section 1A West Tournament Thursday at Marcusen Park. Eric Johnson/photodesk@austindailyherald.com