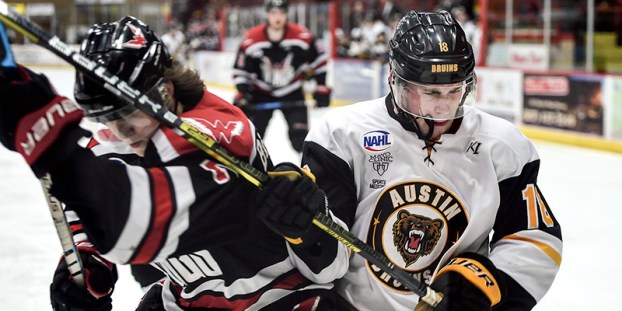 Austin’s Hugh Larkin battles against the boards in the second period against Aberdeen in game four of the team’s Central Division semifinal series Saturday night at Riverside Arena. Eric Johnson/photodesk@austindaliyherald.com

Right after they grabbed a little momentum, the Austin Bruins saw their season slip away in a matter of seconds as they lost game four of the NAHL Central Division semifinals to the Aberdeen Wings 3-1 in Riverside Arena Friday night.

The Bruins pulled to within 2-1 when Josef Mysak scored with 3:57 left in the game and Austin had a chance near the goal after pulling its goalie with two minutes left. That chance was denied and Aberdeen’s John Sladic iced the series when he connected on an empty netter with 1:49 left. 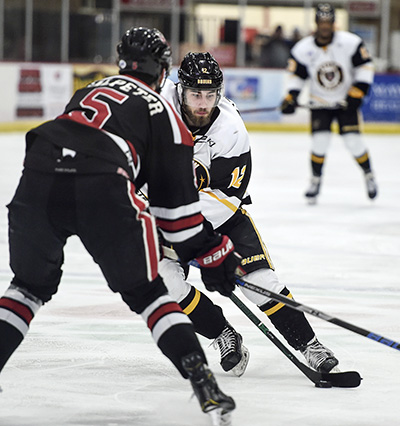 “Unfortunately we pull the goalie and our defenseman gets hits from behind when he was trying to get off the ice because he was hurt and that led to them getting an empty netter, which pretty much sealed our fate,” Austin head coach Steve Howard said. “We had our chances, we did. Especially in the first, we had a ton of chances to go up 1-0. Each team that scored first in this series won.”
The Bruins finished the game with a burst of energy, but it was tough for Austin to keep up with Aberdeen, which will now take on Minot in the NAHL Central Division finals.

“I thought tonight rather than sticking with our game-plan, our guys ran out of gas a little bit,” Howard said. “It kind of showed.” 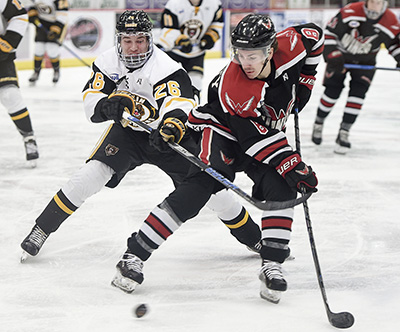 Kyle McClellan stopped 23 of the 25 shots he saw as he gave Austin a fighting chance against the high-powered Wings.
Howard was pleased with the push his team made to make the playoffs and he has hopes for better things for the Bruins next year, which will be the team’s 10th season.

“Going forward I think you’ve got a lot of guys in that room that can come back and have some fire in their bellies to get further,” Howard said. “I’m proud of these guys for the way they played this year. We fell to fourth (in the division) late in the season, but we had a lot of injuries this year and I thought the guys fought hard all year to make the playoffs.” 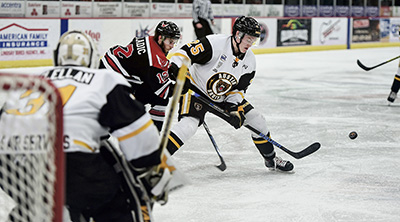 Austin’s Jed Pietila kicks the puck away from the Bruins net in the first period against Aberdeen in game four of the team’s Central Division semifinal series Saturday night at Riverside Arena. Eric Johnson/photodesk@austindaliyherald.com

Making a happy Mother’s Day: Two Men and a Truck taking donations for mothers in need

Two Men and a Truck moving company is encouraging people to make their mother’s proud by donating items to the... read more