High winds, combined with the snow and ice from the recent system slogging through our area, wreaked havoc for drivers and various towns on Wednesday and Thursday.

As of around 10 a.m. Thursday, power outages were reported in Grand Meadow and Lyle, while Blooming Prairie suffered an outage, with power being restored around 6:30 a.m. on Thursday.

Along Highway 56, several power poles were reported down and a power line had fallen over a portion of Highway 218. Power lines were also reported down near Dexter. 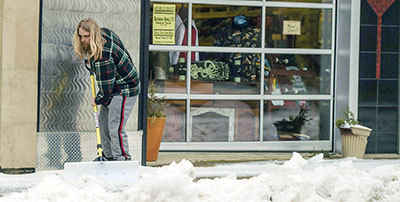 In Austin, Austin Utilities General Manager Mark Niebaur said areas of Austin lost power intermittently throughout the night when a line of thunderstorms passed through.

“We had probably three, four small outages affecting three to four customers roughly per outage,” he said. “One outage affected 50 to 60 people.”

The outages occurred around 1 a.m. with the last of the outages restored between 2-2:30 a.m. Thursday.

The Minnesota Department of Transportation, through its www.511mn.org page, reported that nearly all roads in southern and central Minnesota were completely covered with snow and ice Wednesday into Thursday morning, eventually clearing through the afternoon.

The weather caused several accidents in the area on Wednesday.

An employee of Austin Parks and Recreation parks in front of a downed tree branch, brought down by high winds and ice on Oakland Avenue West. Eric Johnson/photodesk@austindailyherald.com

According to Austin Police Chief David McKichan, the Austin Police Department responded to one accident, while the Mower County Sheriff’s Office responded to nine accidents and calls of assistance. Some of the accidents involved semis, which McKichan attributed to the combination of high winds and poor road conditions.

Initially, Austin Public Schools and Pacelli Catholic Schools announced a two-hour delay in opening, with buses only running on plowed roads; however, the decision was made Thursday morning to keep school closed the rest of the day.

The return to spring will be postponed for a couple days still as there is a chance of precipitation today with a high near 38. The weekend will be cloudy and cooler with the sun making a return on Monday to a high of 52.

—Michael Stoll contributed to this report.