‘We need the choir to sing’: Now is the time to start the conversation about climate change 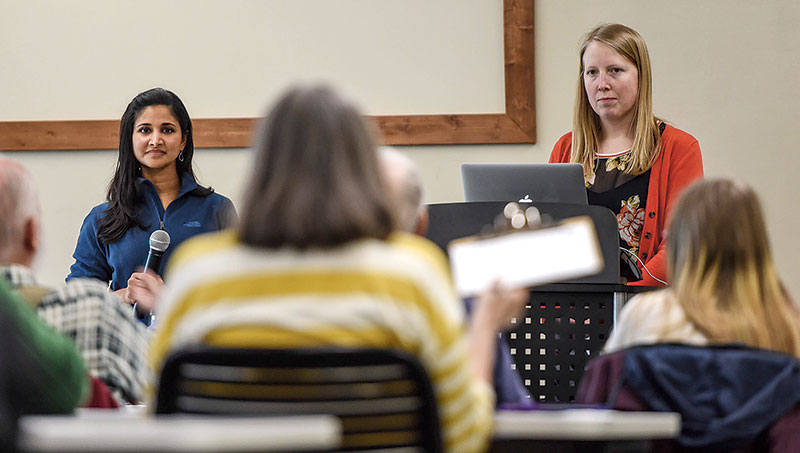 Megan Van Loh, right, and Jothsna Harris, left, of Climate Generations, listen to an attendee to the Climate Storytelling Workshop Saturday as she lists off some of the concerns that brought her to the Jay C. Hormel Nature Center. Eric Johnson/photodesk@austindailyherald.com

Megan Van Loh walked within a circle of about 30 people Saturday at the Jay C. Hormel Nature Center.

As she did so she asked several questions about climate change. Every time somebody agreed with a statement, they were asked to step forward.

The activity was not a right or wrong test, but rather an icebreaker, or measuring stick of sorts, to see where those attending Saturday’s Climate Storytelling Workshop stood and what their concerns were in regard to climate change.

Megan Van Loh leads an icebreaking exercise at the beginning of the Climate Storytelling Workshop Saturday at the Jay C. Hormel Nature Center.

Van Loh, along with Jothsna Harris is part of Climate Generations: A Will Steger Legacy from the Twin Cities. The pair led the two-hour workshop in order to get people at a local level talking about climate change and their part in it.

“We know people are talking about climate change,” Van Loh said before the workshop got started. “This is a critical step in order to get people talking about action.”

That step was highlighted during that same icebreaker activity when people began voicing their concerns about the issue. Many showed frustration about the lack of what should be done while others wondered just how much their voice meant in the grand scheme of things.

“I’m skeptical we can get this fixed,” one voice stated, while another added, “A lot of us feel powerless, I think.”

Both Van Loh and Harris understood the sentiments and the work that still lies ahead. It’s part of a bigger picture, but it starts at a grassroots level, Van Loh said.

“Our focus is on local communities,” she said. “To have that personal connection and engage people locally so they understand that this is bigger than yourself.”

During the presentation the pair related facts of climate change including a chart that showed that from 1880 to 2016, temperatures have steadily risen across the globe, which was followed by another startling detail. 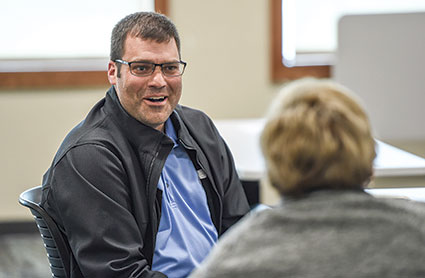 John Sand turns to a desk neighbor during the Climate Storytelling Workshop Saturday at the Jay C. Hormel Nature Center. Attendees were enocuraged to tell each other of what they wanted to accomplish while attending.

While statistics and figures show only an overview of a much bigger trend, sometimes the same charts don’t equate to the ground effort where Climate Generations comes in. More than anything, they want individuals to have a voice in fixing the problem.

“We want to make this personal; a connection to the issue,” Harris said. “We are all connected and we do think this is personal. It makes it harder to ignore and easier to find motivation.”

What’s optimistic for the duo is the reflection of those in attendance, as well as everybody else dedication to change, is the strengthening acknowledgement of the problem and what needs to be done in the face of stats that instead suggest an uphill climb.

The duo is optimistic about the growing acknowledgement of the problem even if statistics indicate an uphill climb.

“What we know from polls is 70 percent of Americans believe climate change is happening, but two-thirds of people never talk about it,” Harris said.

That alone bolsters the effort that people and groups like Climate Generation are making in trying to reverse the climate change trend, even if it looks like a one-sided battle sometimes.

But to Harris, it’s a starting point toward the greater conversation for change.

“Of course we hope people reach across divides,” Harris said. “But it’s okay for the choir to show up, because what we need is the choir to sing.”

Really? Again? Rain or snow, or something in between,…