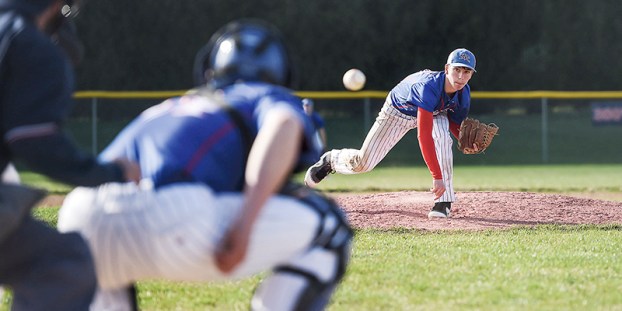 With the game tied at 6-6 and one out in the bottom of the seventh inning, Hanna shook off an 0-2 count and drove a pitch to right field for a sacrifice fly that gave the Rebels a 7-6 win over La Crescent in Adams Friday.

Hanna had been brought up from the Southland JV squad to play third base and he finished with two RBIs from the No. 9 spot in Southland’s order. He knew the moment was big at the end of the game, but he didn’t let it hinder him. 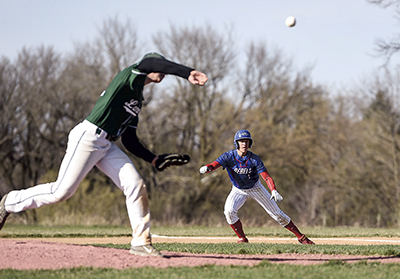 “I was down two strikes and I knew I just had to make contact and put the ball in play,” Hanna said. “It’s a lot different (on varsity). People are a lot bigger and better and there’s a lot of competition.”

Hanna’s RBI capped a big turnaround for Southland (4-6 overall), which snapped a three-game losing streak with the win. The Rebels saw a 4-2 lead disappear when the Lancers (6-2 overall) scored four times in the top of the seventh inning. Cade McCool gave La Crescent a 5-4 lead when he drove in two runs with a single to right field.

The Rebels were able to bounce back in their half of the seventh when Nick Boe singled in a run to pull Southland within 6-5 and Caden Sorenson tied the game at 6-6 when he laid down a bunt for and RBI and reached base on the throw to home.

Southland shortstop Lee Wilson made some big plays with his bat and his glove in the win as he went three-for-three with an RBI.

“It’s a huge win. La Crescent’s always a great team,” Wilson said. “We’ll take any win we can get. We never quit, that’s one thing I like about this team. As soon as that first run got on in the seventh, we were sparked.”

Eli Schwartz didn’t get the win, but he did make some big pitches for Southland. He came up with back-to-back strikeouts in the top of the fifth after La Crescent had runners on second and third with one out.

The Rebels have lost three games by two runs or less this season and Southland head coach Scott Retterath was glad to see his team respond this time around.

“I was glad to see us not roll over and die, because I’ve seen that happen this year. I think a win like this can boost us into some more wins later,” Retterath said. “La Crescent is a good team. Hats off to Eli, he pitched a great game and for the most part we played good defense behind him. (Hanna) didn’t seem like he was shook up at all or anything on his at bat at the end. For him to do that, it’s huge. He put the ball in play and he gave us a chance to win the game.” 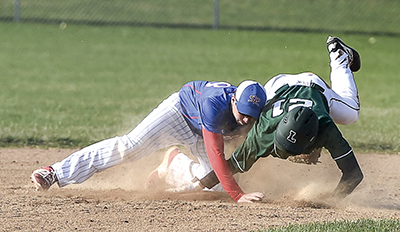 Southland’s Tyler Jax leans into the tag to get La Crescent’s Isaac Petersen on a stolen base attempt Friday evening in Adams. Eric Johnson/photodesk@austindailyherald.com

Austin junior Olivier Andersen was the lone representative from the area at the Hamline Elite track and field meet in... read more