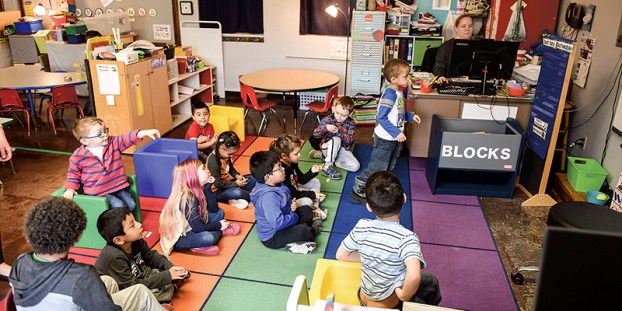 Four and five year olds at the Community Learning Center sit down for a music lesson earlier this week. Should Tuesday’s referendum pass, then plans will move forward to renovate Woodson Kindergarten Center to hold kindergarten and pre-k classes. Eric Johnson/photodesk@austindailyherald.com

The question remains: Will voters say yes or no to $24.888 million bond referendum?

With the Austin Public Schools District growing, officials have been exploring options about what do about space.

Come Tuesday, April 9, taxpayers will be asked to vote on an important project that could affect early childhood learning.

Since 2005, Queen of Angels Catholic Church has housed the Community Learning Center as a temporary housing solution after Woodson Kindergarten Center transitioned into all-day kindergarten.

Using short-term leases, the school district renewed its contract with the church because there were no other spaces available at the time, according to Amy Baskin, former CLC director. 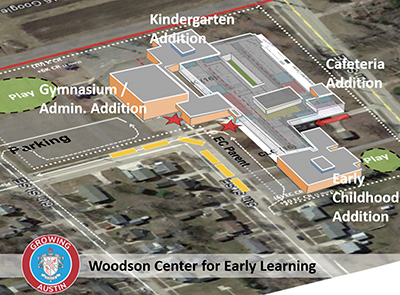 An artist’s rendition shows off how the renovations would be made should Tuesday’s referendum pass. Photo provided

“It’s been a great partnership,” Baskin said. “But, we’ve outgrown it and we need a space designed for our littlest learners. Ultimately, adding onto Woodson, a district-owned building, would be a nice transition from birth to age six.”

Inside, the classrooms are not up to state standards in size and do not have bathrooms or sinks inside of them.

With the current lease set to expire in June 2020, the district needed to act on what the best course of action would be to address its spacing issues with a growing student population.

Back in January, the Austin School Board voted to place a funding question before voters. The decision was reached because of a recommendation made by the Facilities Task Force, which was made up of community members and school staff, as well as a demographic study.

The goal was to meet programming needs, keep tax impact for the community as minimal as possible, and allow construction to begin as soon as possible. So, with that, the district is asking voters for approval to issue $24.885 million in building bonds for additions and renovations at Woodson in order to consolidate early childhood programming from the CLC and create an early childhood campus. The bond proceeds would be used to:

If the referendum fails, then the district would need to continue leasing the space for early childhood programs at the current level, leaving many students and families on a waiting list. If the referendum passes, then construction would start immediately with an anticipated opening in Fall 2020, according to a previous story. 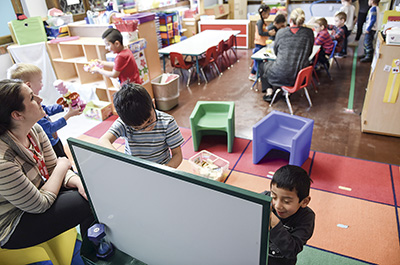 Students at the Community Learning Center could find their classes in a new home should Tuesday’s referendum pass.
Eric Johnson/photodesk@austindailyherald.com

For the last several months, the district has been going out to the community and has tried to inform voters on the upcoming referendum. During a virtual town hall on Wednesday night, Superintendent David Krenz took to the internet to answer questions that voters may have prior to special elections. Some have wondered why the district wouldn’t continue using the current space at Queen of Angels. Krenz stated that it would be more costly to taxpayers to renovate a space that didn’t belong to the district and that renovating or adding onto district-owned buildings would be a more effective use of taxpayer money.

“Queens is a leased facility and we don’t own it,” Krenz said. “It’s over $8 million to bring it up to code to meet the needs of our children and that wouldn’t add anymore spaces.”

After exploring other options, such as the former Target building, Younkers, the old Hy-Vee storefront and the YMCA, officials believed that none of those spaces were built for school programming and would cost a significant amount of money to renovate.

“It’s a significant amount of money that would go into putting up walls,” Krenz said during the townhall. “It’s not about putting up walls, but looking at the programs going inside those walls…everyone’s taxes would go up and the district receives only so much money…it really would be a two-fold hit to taxpayers.”

There were also questions raised about the tax impact on voters. According to the Austin Public Schools website, if voters approve the ballot question, the tax impact to a resident with a home value of $100,000 would be about $3.58 per month.

Those who say no

However, the information provided didn’t answer some lingering questions concerning the bond referendum, particularly about the financial costs taxpayers would receive from the project.

William Ryther of rural Austin expressed his concerns regarding the letter that was mailed out to the community about the special election, feeling that the district failed to provide adequate information about the exact tax impact the project would have on his farmstead property.

“No one is talking about it and I don’t agree with how much this is going to cost me on my farm,” Ryther said. “We’re committing 20 years for this project. I want to be an informed voter. I want more transparency. They (the district) are only appealing to people in town. Farms carry this on their back and nothing is said about it. I have the right to know as a taxpayer before going to the polls. If I don’t get an answer, then I’m going to have to vote against it.”

Those who say yes

Ashley McLaren intends to vote yes on the upcoming referendum, believing that it was important to provide quality early childhood education for students to succeed in development.

“I believe the school district has done its due diligence and that this is the most economic solution,” McLaren said. “We’ve outgrown the space for all the children. I remember taking early childhood classes while they were at Woodson. To go back as a mom with my child would be very cool.”

The services that the CLC provided benefitted parents like Tim and Heather Ruzek, both of Austin. Heather started her early childhood special education career when the CLC opened for the first time at Queen of Angels. From a range of parenting classes to early speech intervention, the Ruzeks intend to vote yes on the referendum.

“We have attended community education classes at Queens as adults and as parents,” said Tim, who utilized the “Daddy & Me” classes. “We also took many early childhood family education classes, starting when we were expecting our oldest daughter, to taking classes with both of our daughters when they were young.”

Distracted driving-related crashes caused 27 fatalities and 178 serious injuries last year in Minnesota, according to preliminary numbers from the... read more