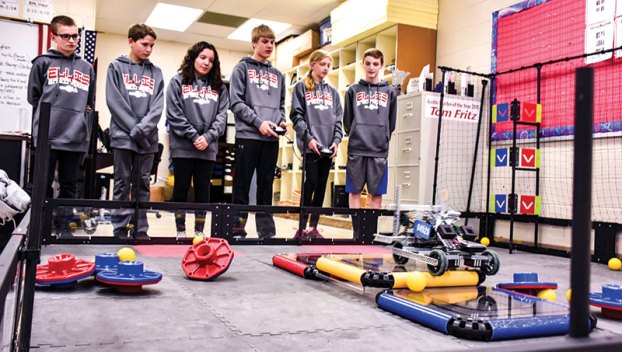 The Ellis Engineers, the VEX Robotics 8th grade team from Ellis Middle School, demonstrate the use of their robot that helped them secure multiple victories this season. The team competed at the World Championship in Louisville, Kentucky, over the weekend and brought back some major hardware. wHannah Yang/hannah.yang@austindailyherald.com

After representing Mower County on the world stage, VEX Robotics teams from both Austin Public Schools and Southland Schools are bringing home some serious hardware.

The VEX Robotics World Championship took place over the weekend, where students from all around the world showcased their STEM problem-solving skills, shared their passion for robotics and built a community with each other.

It was a remarkable season for Ellis Middle School VEX Robotics Team 9452A “Ellis Engineers.” Competing against hundreds of teams from all over the world, Austin was represented and ended up placing 15th in the Spirit Division after the qualifying rounds and ended up the seventh-ranked alliance after getting chosen by a team in Taiwan during the elimination rounds, and advanced through round 16 to the quarterfinals. The team won eight out of 11 rounds in the qualifying matches and tied for one match. When all was said and done, Ellis finished as the top American team left playing in the division, only to be defeated by the number two seeded teams from China, who won the division. 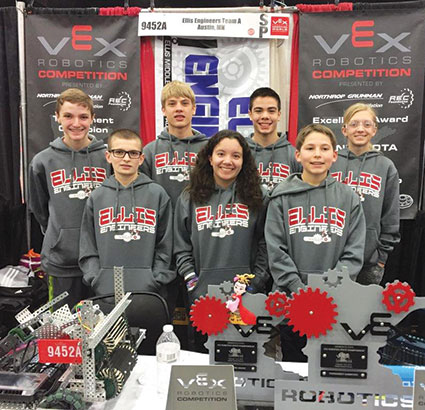 This past weekend marked the first time that Ellis Middle School qualified and competed at the World Championship, and was a competition that many wouldn’t forget anytime soon.

“We did really well,” said Tom Fritz, Ellis Middle School VEX Robotics coach. “Things can happen to your robot that can make it break down, or your alliance partner’s robot can break down. We faced some setbacks and rebounded. Our students were making sure everything was working, so that’s always good. It’s all in the name of the game.” 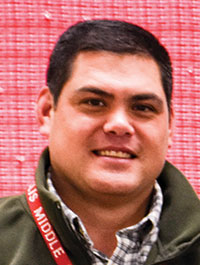 Many of these students who competed over the weekend were ones who developed a love for the game. Andrew Keenan and Owen Carroll, both eighth grade students, expressed their love for VEX robotics and said they developed close relationships with their fellow teammates. Those bonds that were formed helped create a successful dynamic that ultimately brought the students to the top.

“Everybody had goals to get to worlds,” Keenan said. “Then we got to Worlds, and we had even more goals once we got there. I was nervous, because each match could have been our last match.”

For eighth-grader Katherine Diaz, getting to work with her fellow teammates helped shape her experiences in VEX Robotics. They spent almost every day together, practicing their skills as well as strategizing for their competitions.

“I loved all the bonding experiences,” she said. “We’re all really close like family, like brothers and sisters.”

It wasn’t just the team that made it to the world championship; Austin as a community helped put together the funds for the teams to compete. Thanking their sponsors and donors, such as the Austin Police Association, DSC Consumables, G&G Heating/AC, The Hormel Foundation, John and Karla Carroll, Noon Kiwanis-Austin, Pizza Ranch-Austin, Sonex Health and more, this was an incredible season to end on a high note.

“I’m very proud of them,” Fritz said with a smile. “I hope we can do a repeat at state and make another appearance at Worlds again next year. We want to thank everyone for the support from the community and the parents. It took a lot of hard work and persistence.”

The level of play

Also representing Mower County was Southland Schools, who took home some wins of their own. The Southland 7225X Roverbots Middle School team, which is made up of sixth and seventh graders, earned the Create Award, which is presented to a team whose robot design uses a creative engineering solution to the design challenges of this season’s game. Key criteria includes:

• Robot that is well-crafted, has a unique design solution and demonstrates creative thinking

• Team has demonstrated a highly creative design process and methodology

To procure one of two Creative awards that are given to any team from around the world was no small feat. This wasn’t Southland’s first trip to the World Championship either, and coach Paula Mortenson couldn’t be more proud.

“It was super fun as a couple of the judges kept coming back to their pit area and taking video of their robot and watched several of their rounds because of their unique design,” Mortenson said. “The judges actually took time to talk to the team after those matches and it was a special experience for the team to interact so much with the judges and to know that their idea was so special.”

Also competing at the world stage was Southland 7225B Rebelbots High School team, who was able to make it to bracket play as a captain in their Science Division and allied with The Ribbits from Mankato West High School before ultimately falling to the number one seed.

“We did phenomenal, our two teams qualified for Worlds and that’s a big deal to begin with,” Mortenson said. “Our goal was to get to bracket play and our high school team far exceeded that by their great record and I am so proud of them. To see them do that well at that stage was pretty remarkable.”

This was not a small feat for Southland robotics, and the movement of incorporating robotic engineering into the educational curriculum in the district has grown to be popular among students. When the first VEX Robotics teams started a couple years ago, there was only a handful of students who were interested in competing.

Now, the team fluctuates between 22-23 students, with the prospect of having two high school teams and two middle school teams for the next season.

“It blows me away,” Mortenson said. “I’ve always been proud of Southland’s academic rigor and the amount of focus our students have. The level of success that even a small school was even able to attain is amazing. Kids are stopping me in the halls saying they got friends who want to join is so exciting. I know as an educator how real and relevant this opportunity is for them. The things they’re learning and the level of engagement we’re seeing is so wonderful.”

Next season is shaping up to be another exciting one for robotics, and students are already strategizing designs for their new robots. Seeing their passions take front and center in this way left Mortenson speechless.

“I don’t even have the words,” she said. “I knew they were great kids, and they had the opportunity and proved it to themselves. They believe now. Now they believe in their ability to do great things. As an educator, I can’t ask for more.”

With Saturday’s official opening of the We Are Water MN exhibit at the Jay C. Hormel Nature Center, people visiting... read more