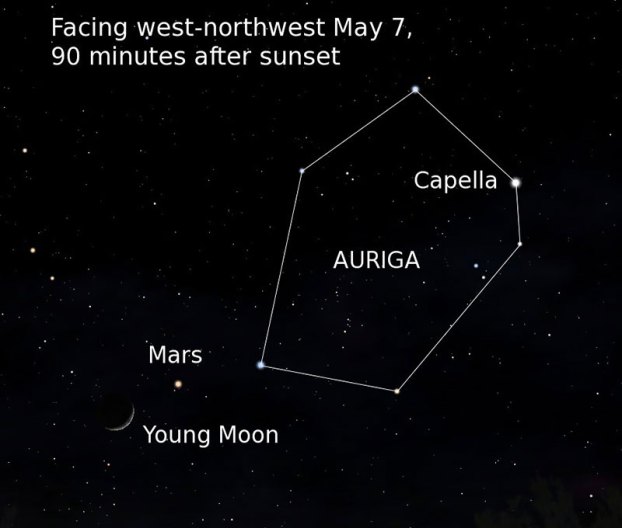 In May we start to lose our old friend Mars, which is dropping out of the evening sky after being a fixture there since last summer. The red planet has great staying power, thanks to being the speediest of the outer planets. But Earth is speedier yet, and now we’re starting to round the sun, leaving Mars on the other side of it.

Mars gets a last hurrah, though, on the seventh. If you look as soon as the sky gets dark, you’ll see a young crescent moon low in the west, just to the lower left of Mars. These two rocky bodies, plus two stars, form a nearly straight line that night. Below and east of the moon is Betelgeuse, in Orion, and high above and west of Mars is bright, multicolored Capella, in Auriga, the charioteer.

Taking center stage in the south now is Virgo, a large but dim constellation with only one bright star: Spica. If you’re unsure which star it is, a waxing moon will be above it on the 15th. Slightly below and west of the star is Corvus, the crow, a small constellation resembling a rather bent-out-of-shape square. High to the upper left of Spica, brilliant Arcturus shines from its kite-shaped constellation, Bootes the herdsman.

Jupiter, a morning planet since December, starts rising before midnight this month. It travels the sky between Antares, the red heart of Scorpius, to the west, and the Teapot of Sagittarius to the southeast. Just east of the Teapot, Saturn brings up the rear. Above Saturn hangs the delicate, curved Teaspoon of stars.

The Eta Aquarid meteor shower is predicted to peak in the predawn hours of the 5th and/or 6th. This shower may deliver as many as 40 meteors per hour if skies are quite dark. Look to the southeast, toward the constellation Aquarius, to see remnants of Comet Halley burning up in Earth’s atmosphere.

Sisters return to the Paramount; Funds will be donated for expansion

It is more than appropriate that three local theater and music veterans bring their fun — and a fundraiser —... read more