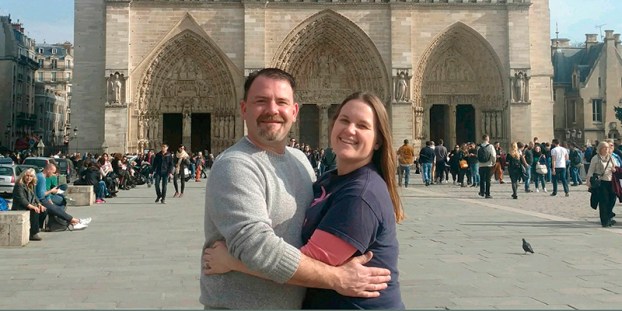 Andrew and Nancy Schnable photographed outside the Notre Dame Cathedral during a visit in 2017. Photo provided

Memories of Notre Dame: Austin residents react to the burning of historical cathedral

For Catholics and tourists around the world, Notre Dame Cathedral in Paris, France, is a must-see when visiting the country.

For those reasons and so many more, it quickly became horrific as flames engulfed the roof of the ancient structure, burning away hundreds of years of history throughout Monday afternoon and into the evening. 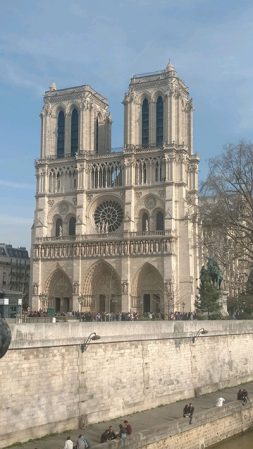 Photo taken by Nancy Schnable when she and her husband Andrew visited Notre Dame Cathedral in 2017. Schnable and Father James Steffes, who has also visited the church, were among the millions that watched the church burn Monday. Photo provided

Those who watched, both in person and on television, looked on in stunned disbelief, shocked as they watched the disaster unfold.

Discover Austin Executive Director Nancy Schnable was among those that watched the event on TV Monday.

An avid traveller with her husband Andrew, Schnable couldn’t help but recall the couple’s own trip to Paris in March of 2017.

“It kind of took your breath away,” Schnable said. “You felt the sadness come over you because you know the significance of it. It’s one of those gut-wrenching feelings — this is real.”

Father James Steffes also visited the gothic cathedral when he was a graduate student, studying in seminary while in Rome in the 1990s.

“I did watch for awhile,” Steffes said. “It was unreal and heart-wrenching all at the same time.”

Work on the cathedral began in 1160 under Bishop Maurice de Sully and was for the most part completed in 1260.

It’s one of the most eye-catching and recognized examples of gothic architecture in Europe, fronted by its twin bell towers and centered by its grand spire. 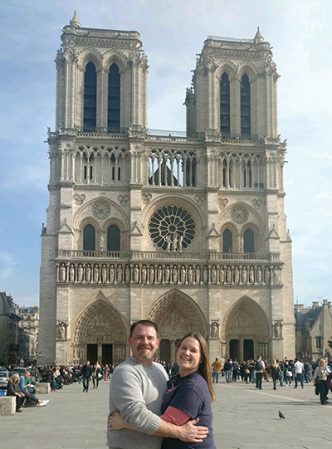 Andrew and Nancy Schnable photographed outside the Notre Dame Cathedral during a visit in 2017. Photo provided

Throughout the years, the church has withstood previous fires and world wars, but never has any destruction of Notre Dame been witnessed in real time by millions across the globe.

To see it ravaged in such a short time span stands opposite of the awe one feels when seeing the church for the first time in all of its glory.

“It’s awesome in the true sense of awe,” Steffes said, as he recounted his time at the church. “It’s magnificent structurally, architecturally, spiritually. It draws one closer to God.”

But for the most spiritual of visitors, the true sense of the church’s magnitude doesn’t hit until they walk through the front doors.

“You see the majesty outside and then you walk inside and you feel the sacredness of the church,” Steffes said.

As a tourist, Schnable was no less taken by the grandeur when she visited in 2017.

“It’s one of the things you want to experience when you’re in the country,” She said. “It’s kind of surreal. You see it on postcards, but to be there and to see it for yourself, it’s magical.”

One of the aspects of the church that grabbed Schnable when first seeing it was just how much of it there was to see.

“It’s breathtaking,” she said. “It’s so big, so overwhelming. You don’t know where to look first.”

Tackling the fire was a massive effort as Paris firefighters had to first reach the fire, which began around the spire area where scaffolding had been erected for refurbishing.

The church’s position, on an island in the middle of the Seine River, made the fire difficult to reach, as well as the immense size of the structure, which made it difficult to put water on the fire as it burned.

Reports Thursday said indications of the blaze’s origin was likely an electrical short-circuit that may have been related to a computer glitch.

According to an Associated Press article Friday, architects and construction workers had stabilized the existing church and that firefighters had left the scene. Earlier in the week, after the fire was extinguished, structural flaws were found in the building.

Paris firefighters had the blaze largely put down by Tuesday morning and it was later reported that had the fire burned just a bit longer, the church could have been entirely lost.

“When I heard that the structure was intact and could be rebuilt, it just gave me great joy and hope,” Steffes said.

On top of that was the effort to save the holy relics housed within Notre Dame, including what is thought to be the original Crown of Thrones worn by Christ as well as a piece of the cross and a nail from the crucifixion.

In particular, Father Jean-Marc Fournier is being considered a hero for running in and personally rescuing the artifacts from destruction.

“Oh my gosh, those are incredible treasures of the church,” Steffes said. “The crown our Lord wore during the Passion…(Father Fournier) knew it was something he had to do.”

The fire was hardly suppressed when talk turned to rebuilding the famed cathedral. Billions of dollars began flooding in to help with the effort.

For visitors like Schnable and Steffes, this effort to help restore the church is heart-warming to see.

“So many people are coming forth because they cherish that building,” Schnable said. “I find that so good to see.”

“From a faith-based perspective, it’s a sign of great hope,” Steffes said. “It’s a sign for the whole church of what we’re going through. Devastating things happen, but with our faith in God, there is always hope.”

By Nancy Lebens MPR News/90.1 FM A researcher from the University of Minnesota has identified a virus associated with a... read more