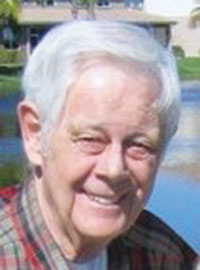 He was born on Jan. 8, 1924, in Fulton, Illinois, to Anna Mae Damhoff and Dick Vander Schaaf. He graduated high school and attended college. He enlisted in the U.S. Navy and was commissioned out of Annapolis, Maryland, as a lieutenant (junior grade). He served on the USS Tabberer, a destroyer escort, during World War II. After his discharge, he returned to college and received his master’s degree in civil engineering. He worked for the Hormel Foods Company for 37-38 years. He was director of production, Grocery Products Division, making Spam, among other items. He traveled all over the world for the company.

He was blessed with three sons, Dick, Stephen and James, with his first wife, Dorothy Ruth Van Ee. He later married his wife of 44 years, Joy, and they moved from Austin, Minnesota, to Pequot Lakes, Minnesota, after his retirement. They split their time between Fort Myers, Florida, and their home on Big Pelican Lake, Breezy Point, Minnesota.

Van was a gentle man who loved his family, working outside in his garden, and being by the calming waters of his Minnesota and Florida homes with his Dutchman’s Joy.

He was preceded in death by his parents; his mother and father-in-law, Edward and Emma Burdine; and his first wife. He leaves to mourn him his wife, Joy; sons, Dick, Stephen and James; stepsons, Curtis L. Klingerman and William E. Klingerman; nine grandchildren; and five great-grandchildren.

His memorial service will be held at 9:30 a.m. on Saturday, April 13, 2019, at the Fort Myers Memorial Gardens. Memorials in Van’s name are preferred to the Hormel Institute or a memorial of your own choosing. Funeral services are under the direction of Fort Myers Memorial Gardens Funeral home, 1589 Colonial Blvd., Fort Myers, FL 33907, 239-936-0555. Online condolences may be offered at www.fortmyersmemorial.com.