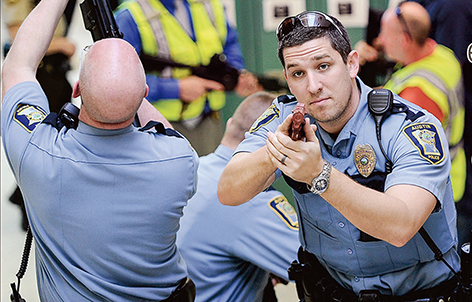 If you see emergency first responder vehicles and heavy police presence outside of Austin High School on Friday, don’t panic.

Austin Police Chief David McKichan said Austin police officers and Mower County deputies will conduct active shooter training on Friday at Austin High School. The day was chosen because students will be off for Good Friday.

McKichan said the most recent large-scale training of this type was in April 2015, when law enforcement conducted an active shooter scenario at IJ Holton Intermediate School.

“Since that April of 2015 training, we have had about half of (the Austin Police) Department turn over, so it is important for us to get those new officers trained in these types of responses as well as re-expose officers who might have had training previously but not in the past few years,” he said.

McKichan said set-up for the training will begin at about 8 a.m. and will be held throughout the day until about 6 p.m. Actors will be used during the training to simulate a realistic scenario.

There’s nothing like a little senior leadership to help a freshman along on the stage of varsity sports. Austin freshman... read more