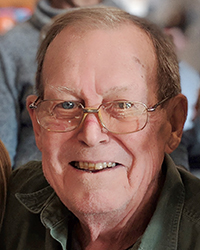 James Sylvester Gulbrandson, 83 of Austin, Minnesota, died Monday, April 22, 2019, at Mayo Clinic Health System-Austin.James was born on July 15, 1935, in Austin to Oswald Maynard and Marie Magdelene (Heimer) Gulbrandson. He grew up in Austin, graduated from Pacelli High School in 1953 and enlisted in the Navy the same year.

On Sept. 1, 1956, James married Toniann Lemon in Kansas City, Missouri. They raised four children together and were happily married for 32 years until Toniann’s passing on June 24, 1989. James remarried Vondean Winona Anderson on Oct. 12, 1991, in Carson City, Nevada. They shared many beautiful years together. Vondean preceded James in death on May 7, 2009.

James served with distinction in the Navy for 20 years as a Chief Petty Officer. He was a member of Queen of Angels Church and the Fraternal Order of Eagles. He enjoyed fishing, boating, traveling, playing cards, telling stories, and spending time with his large family and friends.

Family and friends will celebrate his life at a funeral Mass at 11 a.m. on Monday, April 29, 2019, at Queen of Angels Catholic Church with Father Raúl Silva officiating. There will be a visitation at Mayer Funeral Home from 1-4 p.m. on Sunday, April 28, 2019, and also one hour before the service at church on Monday. Interment will be in Calvary Cemetery with military rites by American Legion Post No. 91 and V.F.W. Post No. 1216.

The family requests that memorials be sent to the Wounded Warrior Project and American Cancer Society in lieu of flowers.

Power of the Pen; Author of ‘Stars Over Clear Lake’ shares love of writing

Standing in front of a writer’s circle, Loretta Ellsworth shares what she knows with fellow creatives on Tuesday morning. Inside... read more