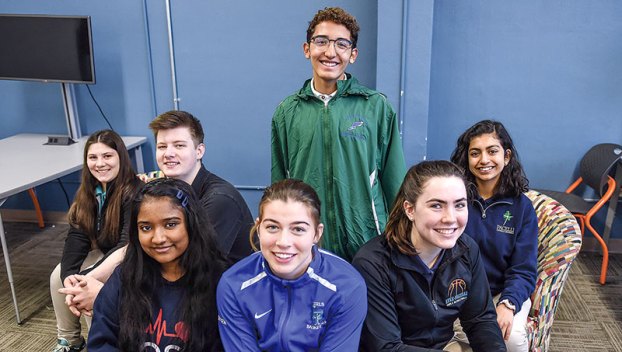 From June 19-22, these students will be competing in various events related to the healthcare industry such as taking knowledge tests and practicums. In order to qualify for the conference, the students needed to place at the state competition held in late March at St. Cloud.

“I’m really excited for them to compete,” said Laura Marreel, dean of students and HOSA advisor. “I’m super excited for nationals and the level of competition is very high and really pushes these kids. This is a huge learning opportunity for them as well.”

HOSA is an international student organization recognized by the U.S. Department of Education and the Health Science Education (HSE) Division of ACTE. The mission is to promote career opportunities in the healthcare industry and to enhance quality healthcare delivery to all people. Its goal is to also encourage all health science instructors and students to be actively involved in HOSA partnerships.

Pacelli’s chapter of HOSA has been around for three years, and during the last two years Pacelli students have secured invitations to the national competition. More than 10,000 students from all over the world, including Puerto Rico and the Providence of Samoa, will be in attendance.

Each month, 13 students meet for HOSA meetings that focus on organizing various events centered around health, which includes a blood drive later this month. They also learn about different tenets of HOSA, such as leadership, innovation and service, according to Marreel.

Although the students may be preparing for their competition in Orlando, each competitor needs to raise about $1,200 to cover travel and lodging expenses. So, HOSA plans to host a couple fundraising opportunities to help offset the cost of going to the conference.

There are also planned evenings at various restaurants around Austin such as Perkins, Applebee’s and Pizza Ranch, where a portion of a customer’s bill would go toward the HOSA organization. Marreel stated that those interested in helping the Pacelli students get to Orlando can drop off a donation to the school’s main office with a check made out to Pacelli Catholic Schools with the memo line addressed to HOSA. 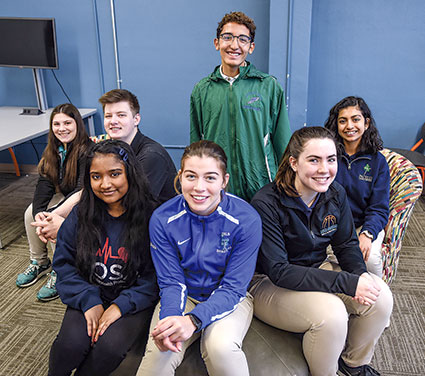 The students who will be representing Pacelli at the International Leadership Conference are:

Aspiring to become a future doctor, Nanda joined HOSA to learn as much as she can about the healthcare field. She will be competing in the knowledge portion of the conference and planned to study up with a medical dictionary before heading out to Florida.

“I heard about HOSA and wanted to be a part of it,” she added. “I love meeting new people.”

This isn’t McMahon’s first rodeo. She was invited to the international competition held in Dallas, Texas, last year and was thrilled at qualifying to compete in Orlando this June.

“This is a great opportunity to meet people,” McMahon said. “I’m interested in healthcare, and this is also a good chance for colleges to scout you out for school.”

An exchange student from Colombia, Castillo joined HOSA after hearing about the organization’s mission through McMahon. He wanted to learn about the differences in healthcare between the United States and his home country.

“I wanted to get involved,” Castillo said. “I want to see how healthcare compares here in the United States and to Colombia and experience things that I wouldn’t experience back home.”

DeSilva joined HOSA after first hearing about it through her cousin, and became instantly hooked on building relationships with fellow students who were interested in medicine and healthcare.

“I thought it was very important,” DeSilva explained. “I want to go into healthcare because I believe that it has some of the most important jobs. I’m really looking forward to conference for opportunities on learning experiences and responsibilities that are in the industry.”

Nelsen always held an interest in medicine and wanted to pursue it for a career. Having joined HOSA, she learned a great deal about community service and hopes to eventually become a pharmacist.

“I’ve always had a general interest,” Nelsen said. “I want to develop more knowledge and skills at the international conference.”

For the competition, Nelson said that their chapter’s community awareness project that was presented focused on phone addiction and how the group presented their research to their fellow peers at Pacelli as well as having created flyers. During the international conference, they will be interviewed by judges about their project.

“I’m excited to learn and to compete while there,” Nelson added.

Participating in sports medicine, Fishbaugher was interested in learning more about the human body and how injuries affect the overall health of an individual. He planned to continue studying medicine in college. During the conference, Fishbaugher will be demonstrating the proper way to tape ankles and wrists when treating an injury.

“I want to learn and keep learning,” Fishbaugher said. “I love competing and am looking forward to the HOSA conference.”

Months after Southland Schools District voters said yes to their bond referendum, there are signs of progress and updates for... read more