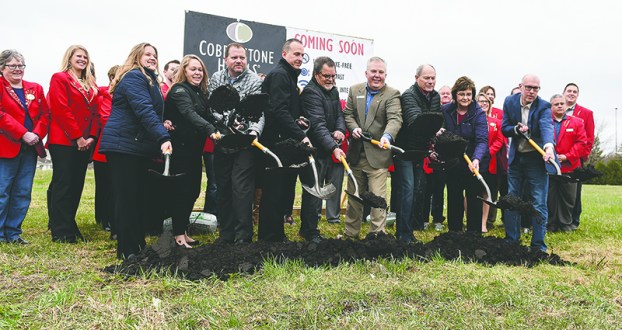 Ground was officially broke for the new Cobblestone Hotels behind the hold Hy-Vee building Thursday morning. Photos by Eric Johnson/photodesk@austindailyherald.com

A proposed hotel slated to be built behind the old Hy-Vee building took one step closer to becoming a reality Thursday morning.

City officials and representatives from the Neenah, Wisconsin-based Cobblestone Hotels conducted a groundbreaking ceremony, surrounded by Austin Area Chamber of Commerce ambassadors, at the open lot next to Prairie Sky Apartments.

“It’s very exciting to have a Cobblestone property come to Austin,” said Austin Area Chamber of Commerce President Elaine Hansen. “They have a great reputation as a wonderful company, so we’re excited to have them come and expand our community.”

It was officially announced in December that Cobblestone Hotels planned to build a new location in Austin, though the city was in discussion with the company for some time, according to City Administrator Craig Clark.

“We couldn’t be happier about the opportunity to bring 66 rooms to Austin,” he said. “We know it will be a fabulous project and a great amenity for the community.”

According to Cobblestone President and CEO Brian Wogernese, the hotel is part of the company’s push to get a foothold in Minnesota.

“We’re big in Wisconsin, and Minnesota is right here,” he said. “We decided that we corporately needed to make a push in before we could start selling other locations to franchisees.” 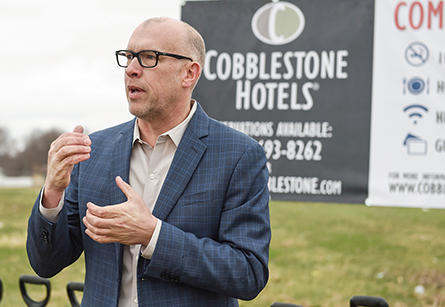 Brian Wogernese, president and CEO for Cobblestone, speaks before ground was officially broke.

The Austin location will be the 141st Cobblestone Hotel in the country.

It will also be the second largest hotel in the Cobblestone brand.

“We have looked in Austin for a couple of years,” Wogernese said. “We were originally looking for a downtown project and we liked the downtown, but we like the highway visibility too.”

According to Discover Austin Executive Director Nancy Schnable, the hotel’s construction addresses a need in the community.

“We’ve seen an increase in lodging occupancy over the last couple of years, so it is nice to have some additional lodging options,” she said.

Hansen agreed, citing the opportunities the hotel could bring.

“Having more rooms will open up opportunities for bigger groups to come to Austin for different events,” she said.

City officials lauded the new hotel as a positive sign for growth in Austin.

“It shows us that people believe in Austin and believe we’re going to be bigger and grow,” said Austin Mayor Tom Stiehm. “We’ll have more people in town because of it; more shopping, more tourists. It’s a good thing for Austin.”

“This is a domino effect on the work that was done on Oak Park Mall and the re-use of the old Hy-Vee and all of the great things going on in Austin,” Clark said. “One builds on the other and this is certainly to be added to that list.”

Wogernese said that construction is slated to begin in about three weeks as they are waiting for better weather.

“We’re probably about nine months out (from completion of the hotel),” he said. “If we can push, we could get it open by the end of the year. That would be our goal.”

Projects, elections and snow days subject of school board meeting

The Austin School Board met for a special session Thursday afternoon to go over several agenda items, ranging from snow... read more