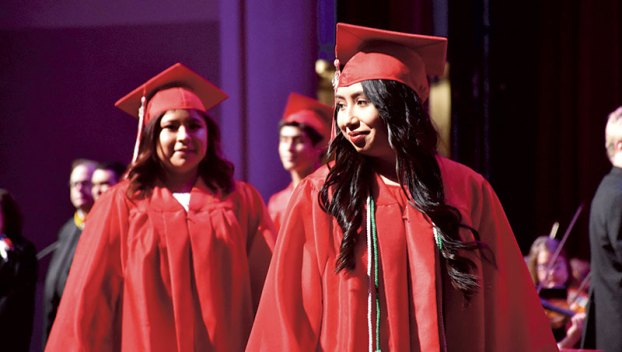 The Austin High School class of 2018 seniors walked across the stage for the last time during their graduation ceremony last year at Knowlton Auditorium. Herald file photo

More seniors graduated last year than before with 55,869 students (83.2 percent of the overall graduating class) reaching this achievement and moving onto careers and college. Also, 3,641 students from earlier classes earned their diplomas in 2018, graduating five to seven years after starting high school.

“Graduating high school is a critical step on every student’s path to find their own success,” said Education Commissioner Mary Cathryn Ricker in a statement. “In Minnesota, we do not give up on our students. Behind every single data point in this year’s historic graduation rate, I not only see the unique stories of individual students, but also the hard work that educators, administrators, coaches and families put into supporting the needs of our students so they could reach this important milestone.”

Statewide, the four-year graduation rate increased from 2014 to 2018 and disparities between white and non-white students narrowed; however, there were still significant gaps in those rates, according to the MDE’s data. 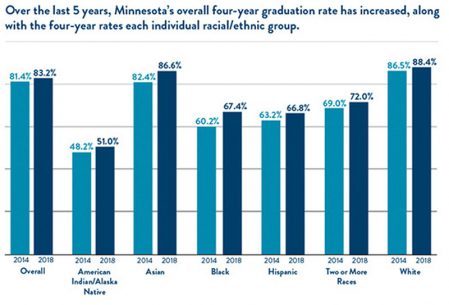 Graphic courtesy of the Minnesota Department of Education

A step in the right direction

Diving into the data specific to Austin Public Schools shows that the district is trending toward a positive direction in regards to graduation rates.

“This particular rate is one of the highest we’ve seen in several years,” said John Alberts, executive director of educational services. “It’s really through the work of our teachers throughout the district and our parents who help support the system to get the grad rates up. It’s hard to attribute this to any indicators, but it’s more of a group or community effort to see our graduate rates increase. It’s a whole community effort.”

“All of our student populations saw an increase in graduation rates, that’s good news,” Alberts said. “We’ve seen some fairly steep increases in some cases like the EL population and we did see a nice closing of that gap in 2018, and saw the same thing in our non-white student population. All of our current trends are moving in the right direction. We want to make sure all students succeed.”

However, he said it was important to see the bigger picture when it came to comparing Austin’s demographics to the rest of the state. The MDE has a statewide goal of reaching 90 percent of students graduating from high school by 2020, with no student groups falling below 86 percent.

“It’s a good mark to shoot for,” Alberts said. “In terms of local context, we do see some disparities that are relative to our graduation rates. Our highest disparity is actually in the free and reduced lunch population, so we see that poverty is having an impact on student graduation rate.”

Looking ahead, there’s hope that the launch of the Austin Assurance Scholarship Program will positively affect the district’s graduation rates by removing financial barriers preventing students from pursuing a higher education that will ultimately contribute to their success in post-secondary career options.

“We want to bore out some of the relative reasons for some of the students dropping out of school to work in the workforce to provide for their families,” he said. “That kind of bears itself in the qualitative data from students who are choosing to withdraw from school. We’re hoping that (the scholarship program) will have a positive influence on graduation rates. More importantly, seeing a positive influence on students’ lives and their families lives.”

The Jay C. Hormel Nature Center will be holding a kick-off event for the traveling exhibit “We Are Water MN”... read more