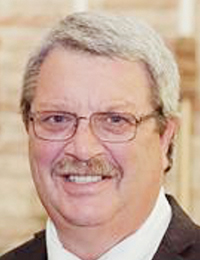 Jerry was born on Aug. 8, 1956, in Carroll, Iowa, to Leon and Dorothy (Klocke) Steinkamp. He was the oldest of eight children, growing up on his family farm near Grand Meadow. Jerry had a playful nature and loved to joke and laugh with everyone who knew him. Jerry grew up playing football, basketball, loved fishing in any season and was an avid bowhunter. Jerry was a devoted husband, loving father, affectionate grandfather, and dedicated friend. Jerry smartly proposed to Ronda Hovden on their third date and they were married within a year on Aug. 12, 1977. Their union culminated in four children and seven grandchildren. Jerry believed in a strong work ethic, which he passed down to his children. Jerry worked for Kemps of Rochester, Minnesota, for 43 years mixing ice cream and working in the lab. Jerry also maintained the family vehicles and held another job for most of his life. Although Jerry was driven to provide for his family, he always made time for the important things, whether it was making his kid’s or grandkid’s events or calling his mother and father every night to check in. Jerry had an affinity for games, old movies, and playing with his dog.

Jerry was preceded in death by his grandparents; mother-in-law and father-in-law; and best friend, Ted Hovda.

Funeral services  will be held at 3 p.m. on Saturday, April 13, 2019, at Bear Creek Lutheran Church in rural Grand Meadow with Pastor Larry Iverson officiating. Visitation will be held for one hour prior to the service on Saturday at the church. Hindt Funeral Home of Grand Meadow is assisting the family. Online condolences may be left at www.Hindtfuneralhomes.com.

California aims to find towns that may be the next Paradise