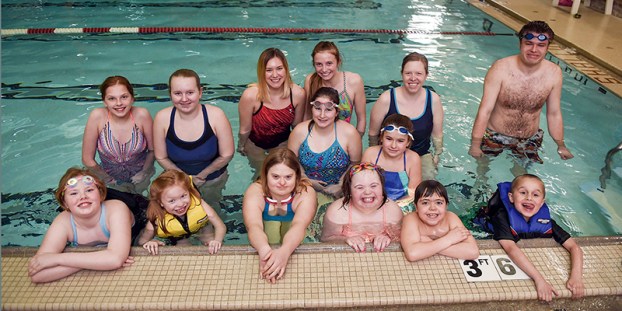 The YMCA Special Olympics swim team has grown in numbers of swimmers and coaches in its second year as it continues it’s positive impact. Eric Johnson/photodesk@austindailyherald.com

The Austin YMCA Special Olympics team is back for its second year and the team has grown in numbers and impact on the community.

The team has nine Special Olympic swimmers and five unified swimming partners on this year’s team. Add to that four Austin High School swimmers, who have also come in to help with the team.

Austin senior Sierra Leichtnam was a member of of the Packer swim team last fall and now she’s spending her evenings helping the Special Olympic swimmers learn some of the tricks of the trade.

“I think it’s special that they have this opportunity, so they feel like any other kid would. We let them know we’re here for them if they need any help or motivation,” Leichtnam said. “When we’re in the water with them, we teach them strokes and we let them know that we’ve been swimming for a long time and they can ask us anything they want about swimming.”

Jordyn Aakre has also stepped up as an assistant coach for the Special Olympics team and she said it’s great to teach the young swimmers, while being involved in the community.

“I think it’s awesome. We miss being in the pool and this is a way for us to get back in there,” Aakre said. “This is also a way for us to help these kids get better and we make new friends while we’re at it. I love all of our swimmers and they make it fun to come here every day.”

The team had eight special olympics swimmers and four unified partners swim qualify for the state meet in Rochester on Sunday. The state meet will be held at the University of Saint Thomas on June 21-22. 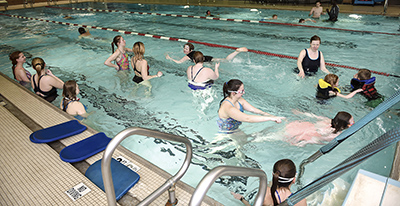 Leichtnam said it was fun to be part of the meet as she cheered on the swimmers she’s been working with.

YMCA aquatics director Tracey Christianson credited the growth of the program to a group of parents who have helped get the word out about the team. She’s hoping the program will continue to grow in the future.

“The parents who kind of started it last year have been good about promoting it this year and that’s led to the growth,” Christianson said. “I expect it to continue to growing. It’s very unique. We have the typically developed kids working with the special needs kids and it really helps with that community factor that we’re looking for at the Y.”

The Austin boys volleyball team had to wait a long time to host a home match and the team did... read more