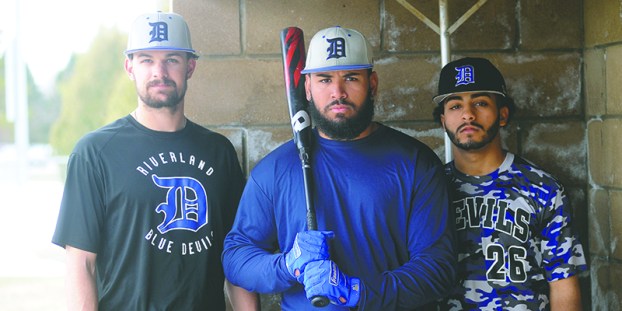 From left: Riverland baseball players Brad Morris, Javier Ramos and Yamil Ocasio have all stepped up for the Blue Devils this spring. Rocky Hulne/sports@austindailyherald.com

From near and far away: Players have traveled a long way to Riverland

When it comes to college sports, it’s not how you got there, but what you do when you get there.

Three key players of the Riverland Community College baseball teams may have arrived in Austin because of various circumstances, but they’re all making their chances count as they’ve stepped into big roles with the Blue Devils this spring.

Brad Morris, a sophomore center fielder from Auckland, New Zealand, found Austin from a Google search. Yamil Ocasio, a freshman shortstop from Coamo, Puerto Rico, simply followed his older brother Xavier’s footsteps to Riverland and Javier Ramos, a freshman right fielder from Fajardo, Puerto Rico ended up on campus in the second semester after his friend and current Blue Devil Yadiel Ortiz encouraged him to make the 2,400-mile trip to Austin to play baseball.

“Our league has predominantly moved to international kids. A lot of their kids are from all over,” Hahn said. “It’s a cool experience for our local guys and it’s a unique experience for them, just as much as it is for us as coaches and the faculty at our school.” 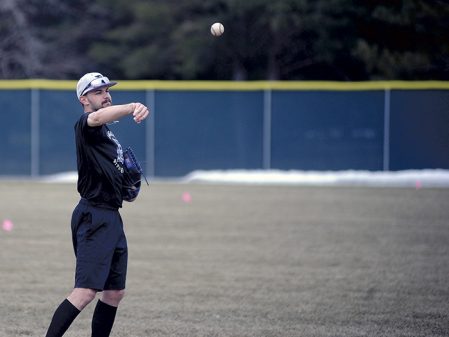 Morris had played a couple of seasons of amateur baseball in New Zealand when he ran a generic Google search looking for baseball teams in America. He landed on the Minnesota Amateur Baseball website and the now defunct Austin Blue Sox happened to be first on the list of teams.

Morris contacted the Blue Sox, then he traveled nearly 8,500 miles to Austin to play for the summer. Before he knew it, Morris found about about Riverland Community College and he was playing college baseball. He’s hitting .406 this season with a homer, eight doubles and 13 RBIs.

“I came here for summer baseball. I started talking to the (Blue Sox) coach (Brandon Rector) and I ended up here,” Morris said. “The first winter was pretty tough, but we have a pretty good support crew with the advisors and the coaches (at Riverland). They made it pretty easy.”

Morris has committed to play baseball at Division II University of Minnesota-Crookston next spring.

Morris has been nothing but dedicated since he showed up on campus last fall.

“He’s an awesome kid, he’s a great leader and he’s probably the hardest worker in our program,” Hahn said. “He’s having a really good year for us. He’s a really driven kid, not only with his athletics, but his academics as well.”

Ramos has had to learn about a new culture and a new climate in just a couple of months, but he’s found his swing as he is hitting .316 with a state-leading four homers, to go along with three doubles, one triple and 21 RBIs.

“I played baseball all of my life in Puerto Rico and I had a friend who talked to the coaches for me. I wanted to come here and play baseball,” said Ramos. “ It’s too cold here, and I’ve had to adjust.”

Hahn made it work for Ramos to come to RCC after he saw film of him and he’s been pleased with the results.

“He’s been a difference-maker with his bat. He’s changed his game and he’s been a good find for us,” Hahn said.

Ocasio has shined at shortstop for the Blue Devils, and he’s also been a solid lead-off hitter with a .478 batting average to go along with six doubles and 14 RBIs.

The Blue Devils (9-9 overall) have picked up their play since returning from their Arizona trip. They’ve won six straight games and the players are adjusting to Hahn in his first year as head coach.

The Blue Devils will play at Central Lakes at 4 p.m. Sunday. RCC’s home opener is scheduled against Rainy River at noon on April 14.

McMasters powers Austin to a split against Kasson-Mantorville

Austin senior Hannah McMasters provided a power surge in the second game of a doubleheader as the Packers beat Kasson-Mantorville... read more