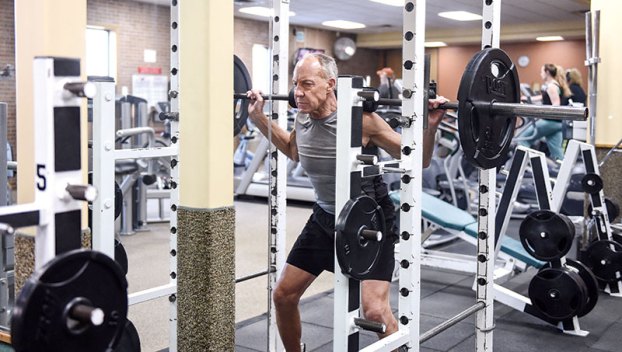 Jerry Ulwelling lifts weights at the YMCA. In his early 70s, Ulwelling credits a balance of mind and body for being as fit as he is. Photos by Eric Johnson/photodesk@austindailyherald.com

Fit as a Fiddle: Jerry Ulwelling a model of what fitness can do

Jerry Ulwelling is living proof that a lifetime of fitness is a life well lived.

The 72-year old Austin man started getting serious about physical activity at age 13 and he hasn’t stopped since. Ulwelling has ran nearly 57,000 miles and biked 93,000 miles over his lifetime. He’s ran in 42 marathons, 200 road races, 25 bike races and he also logged in 40 years of competitive basketball and racquetball. Ulwelling doesn’t have a magic secret for his endless motivation to stay fit, but he has certainly reaped the benefits over the years.

Jerry Ulwelling has been a regular at the YMCA, which he considers a “Godsend.”

“It’s absolutely huge. We all have self esteem and I think your mind body and spirit all run together, and if you’re missing one of those a few spokes fall out of the wheel and if you have all of them, everything falls into place,” Ulwelling said. “I always thought I’d be a better father, husband and better with the grandkids (due to being fit). There isn’t anything you can’t do without those roadblocks and you’re going to have a better attitude. You’ll be nicer and you’ll get a long with people better.”

Ulwelling has adjusted his workout routine every decade of his life to prevent injuries. He’s also found ways to stay motivated by challenging himself to athletic feats. When he turned 50, he completed 51 reps of a 135-pound bench press in a row and he once made 204 consecutive free throws.

Ulwelling said working out is easy when you’re doing something you like doing. His advice to others interested in staying in good shape is for them to do the same.

“Find things that you really enjoy and you’ll stay with it. We all need to be better in fitness, I think,” Ulwelling said. “I’ve always stayed active and now I have 11 grandkids. I’ve got to keep up with them.”

Ulwelling’s peak performance came in 2011 when he biked from Oregon to Massachusetts with the late Dr. Dick Schindler and four other friends.

“That adventure was probably one of the highlights of my life. Not everybody gets to do something like that,” Ulwelling said.

Ulwelling said he picked up his work ethic early on as a member of the Pacelli basketball team at a young age. At age 13, Ulwelling would go to Shaw Gym after school where he would play basketball for an hour, then he would do his paper route, homework and eat some supper, before returning to the gym that night.

As he grew older, he continued to work hard on the basketball court and that work ethic carried him into running. Before he knew it, Ulwelling was running to Iowa and Albert Lea and he also became the first person from Austin to run a marathon in 1977.

See the entirety of this story in the newest edition of Austin Living Magazine.

“Dear Friends – I wish I could extend a personal invitation to all the people who would like to attend... read more