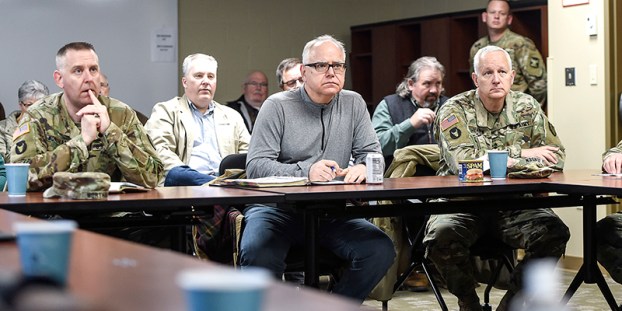 Minnesota Gov. Tim Walz learned about the continuing efforts to restore power to portions of southeast Minnesota, during a visit to Mower and Freeborn Counties Saturday morning.

Walz was briefed by members of emergency management, law enforcement and the National Guard on where things stood as Freeborn-Mower Cooperative, with the help of line-workers from Iowa, Wisconsin and Illinois, continued working on downed lines and returning power to communities.

Walz also toured the two-county region by air where he got a visual of power poles laying on their sides and downed power lines. 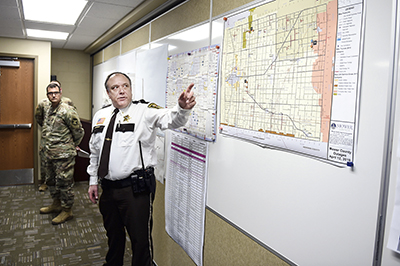 Mower County Sheriff Steve Sandvik points out on a man how the National Guard was deployed in helping support his department during a briefing for Gov. Tim Walz Saturday at the National Guard Armory in Austin. Eric Johnson/photodesk@austindailyherald.com

“The one thing that’s important is to get up there and see it,” Walz continued. “If you’ve got power at your house, the snow is going to be melted, it appears nothing happened. This is pretty catastrophic. It was good to see it that way.”

One by one communities in both counties have steadily come back online. Freeborn County Emergency Management Director Rich Hall reported that Clarks Grove got its power back at around 10:30 p.m. Friday night and Alden not long after at around 12:20 a.m. Saturday morning.

In Mower County, Lyle and Elkton remained without power as of Saturday morning, as well as a small pocket in Grand Meadow, but Jim Krueger, CEO of Freeborn-Mower Cooperative, estimated that Elkton and Lyle could have its power back on later tonight.

However, he said the situation in Lyle presents a unique situation as the problem affecting getting power back online there isn’t in restoring poles and lines. Instead the problem is rooted in Iowa.

“Lyle is a little more unique,” Krueger said. “The damage is in northern Iowa.”

Specifically, the trouble comes from a substation near St. Angsar, Iowa that can’t transmit power.

At the storm’s height, Krueger said that 8,200 customers were without power and around 500 power poles were downed. As of this morning, 1,700 co-op members were still without power.

“This has been kind of unreal to watch unfold,” Krueger said.

Krueger went on to say that most places should be back online by Monday, but that some individual customers could be out until Tuesday morning.

State officials said it’s unclear just how much this disaster will cost in the end. As more and more power is returned and the clean-up comes to close, assessments of damage will become clearer with the hopes of getting federal dollars to bolster state emergency funding.

“I think people look at this and they didn’t see the buildings blowing down, we didn’t see the massive flooding, but this is a very expensive proposition to build this back up,” Walz said. “If I get the opportunity on Monday, the president will be here, we’ll be sure we’re articulating to the president that a disaster declaration from the federal government is really we what need too.” 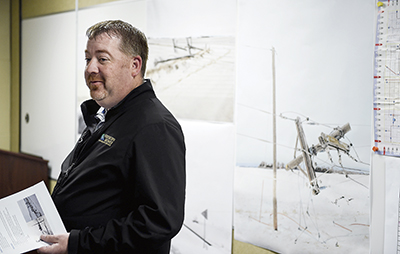 Freeborn-Mower Cooperative CEO Jim Krueger gives an update Saturday morning as to where his crews are in terms of getting power back up for customers. Eric Johnson/photodesk@austindailyherald.com

From the beginning, this past week’s storm had an instant impact.

Mower County Sheriff Steve Sandvik said his deputies were dealing with multiple crashes from the beginning and with the arrival of the ice and wind impact, the stress on resources became clear.

“We had every available deputy on the road,” Sandvik said. “ We had no assets to maintain public service.”

In Freeborn County, Sheriff Kurt Freitag saw much the same thing with his department as well as fire departments from surrounding communities.

“Before the (National Guard) was able to arrive, we had just about all of our fire departments out,” he said.

Crews from Freeborn-Mower Cooperative were out immediately to deal with the situation, but as conditions continued deteriorating, it became clear it was going to be an uphill climb.

The big boost came from the National Guard, which within four and a half hours after Walz’s disaster declaration, had troops out in the counties, blocking off roads that had power lines across them. This freed up the sheriffs departments to get back to attending to their duties.

Overall, 143 soldiers from the National Guard were deployed and 48 vehicles utilized.

“They were superbly prepared because they knew this was their mission,” said Major General Jon Jensen, Adjutant General of the Minnesota National Guard. “It’s very reflective of how seriously we take this mission across the state.”

Walz praised the leadership and cooperation that has helped get things back to where they need to be.

“There’s a lot of leadership here, working at a lot of levels in here and that’s critical,” Walz said. “This is what we are supposed to do. We’ll do this right and will continue to monitor.” 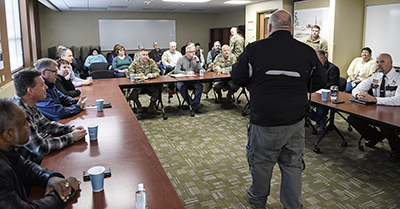 Gov. Tim Walz, center, was in Austin at the National Guard Armory where he received an update as to where recovery efforts were from this past week’s storm. Eric Johnson/photodesk@austindailyherald.com

While plenty of work remains to be done, officials are seeing positive steps toward getting everybody back up and running again.

“There are poles still on the ground, but when the cities and townships are with power, then we’re well on our way to recovery,” said Mower County Emergency Management Coordinator Amy Lammey. “It’s going well.”

“I think we’re pretty resilient,” he said. “The communities rallied together … recovery is long term, but we’re going to get there one step at a time.”