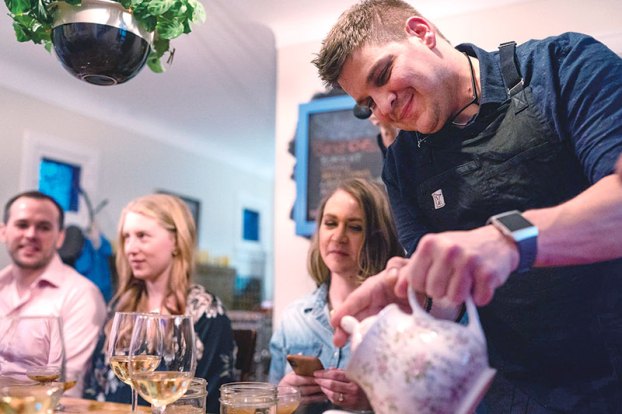 Justin Emil pours hot umami broth onto balsamic-miso cucumbers and truffle pearls for the second course of the meal at Scherzo at his home in Minneapolis on March 29, 2019. Evan Frost/MPR News

Justin Emil and Katie Thieking had been dating only a month or two when he popped the question. No, not that question.

For a year now, they’ve been doing just that. Together they run Scherzo, which Emil describes as an “underground supper club” out of Emil’s house in south Minneapolis.

They have one table, which seats eight. Emil cooks and helps Thieking serve. Their husky mix, Gizmo, spends the evening confined to some other part of the house.

The club is unlicensed, uninspected and unregulated. Dinners happen a couple of times a month, and every menu is different. Word spreads online; diners don’t find out where they’re going until they put their money down. And although couples sometimes come with friends, “The best dinners are when there are four couples and they don’t know each other,” Emil, 38, said.

“It’s sort of a social experiment,” explained 41-year-old Thieking. “You get a group of eight people that don’t really know each other, and by probably the second course, they’re friends.”

Speaking of courses: At a Scherzo dinner in late March, there were five. While Emil’s selections usually follow a theme, this was the club’s first anniversary. The only theme this night was that all the dishes had been served at some point during the preceding year. To name a few:

Emil got his training in the culinary arts at Nicholls State University in Louisiana. There he developed an appreciation for Cajun and Creole cooking, but he lets his imagination take him far afield from any particular region.

The prices vary with the night’s menu. The tab for the anniversary dinner came to $75 per person before drinks. For perspective, though: This is not a dinner that you follow up with a movie or a play. This meal is what you’re doing for the evening — the whole evening. This group didn’t break up until nearly four hours after the first guests arrived.

Emil realizes that he might make more money working for a restaurant, but he’s quick to point out that money isn’t everything.

Still, he’d like to slide the scales a bit more in the direction of work.

“Making the food is easy,” he said. “Filling the seats is the hard part … I would do this every week if I could.”

California aims to find towns that may be the next Paradise