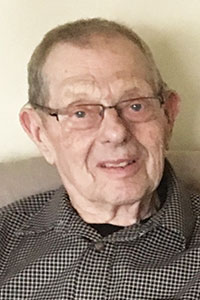 He was born Jan. 1, 1929, in rural Byron, Minnesota, to Edward and Alma (Jensen) Severson. He was baptized and confirmed at Evanger Lutheran Church in Sargeant, Minnesota. On Sept. 7, 1951, he married Doris Witzel. The couple farmed for several years and then started a farm/auto repair business. Arnold worked in his shop until the day he passed away. Arnold enjoyed antique tractor and engine shows, especially displaying his own tractors and model engines. Arnold was an active member of Evanger Lutheran Church most of his life and served on the church counsel. He and Doris are current members of South Zumbro Lutheran Church. Arnold enjoyed visiting with friends in his shop and having coffee.

The funeral service will be held at 11 a.m. on Tuesday, April 16, 2019, at South Zumbro Lutheran Church in Kasson, Minnesota, with the Rev. Eldon Simonson officiating. Visitation will take place for one hour before the service on Tuesday at the church. Burial will be in the Evanger Lutheran Church Cemetery in Sargeant following the service. Condolences can be left at www.griffin-gray.com.