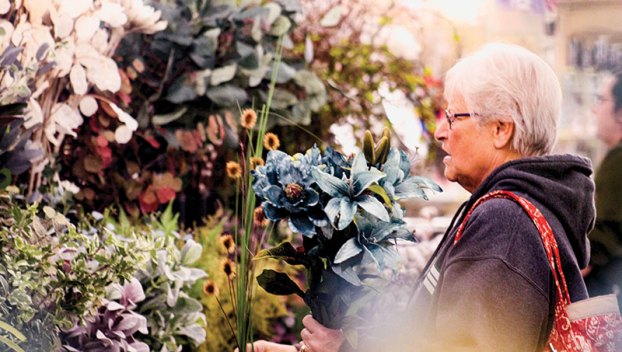 Corliss Ellington of Austin picks out floral stems to make arrangements at the new Hobby Lobby store that held its grand opening on Monday morning. “I love that I don’t have to travel far anymore,” Ellington explained. Photos by Hannah Yang/hannah.yang@austindailyherald.com

After sitting empty for several years, the former Target building found new purpose with the opening of Hobby Lobby on Monday morning.

More than 100 people wandered through the front doors of the new Hobby Lobby and were greeted by employees and a wide array of craft supplies, floral stems and home decor items. From near and far, customers expressed their excitement to see new businesses coming into town.

“The customers were so excited, saying now they don’t have to drive to Rochester or Mason City to get to a Hobby Lobby,” said Shaya Stasch, store manager. “We’re excited to grow with the community. It’s exciting.” 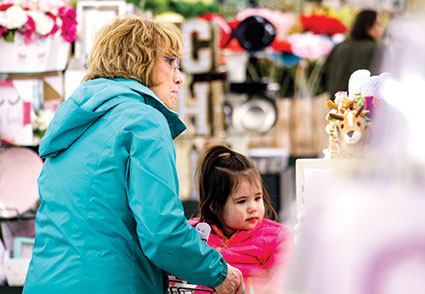 Ann Sundal of Austin shops with her granddaughter, Junia Lassiter of Madison, Wisconsin.

Store hours are from 9 a.m. to 8 p.m. Monday through Saturday. The business is closed on Sundays.

After what seemed like solemn news seeing stores like Shopko, Sears Hometown, Younkers and Target closing their doors in Austin, there was some hope for those seeing Hobby Lobby stepping into Austin, along with the future opening of Marshalls and Five Below.

Ann Sundal of Austin on Monday was looking for crafting activities to enjoy with her granddaughter, Junia Lassiter, who was visiting from Madison, Wisconsin. The two eyed the various toys that were on display, as well as looked at some coloring supplies. 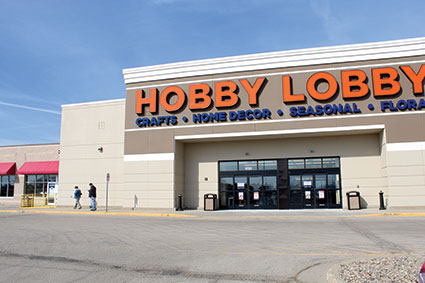 Hobby Lobby had its grand opening on Monday morning inside the former Target building. Around 80 people work for the new retailer.

“It’s really fun to see some things for summer and spring,” Sundal said. “I like looking for things like kites and scrapbooking materials. It’s really nice to have a Hobby Lobby here. I like to shop Austin, and keeping dollars inside the community. I know it’s hard to keep businesses here with us being so close to Rochester, but I’m excited for the new businesses coming in.”

Furniture Mart USA, parent company of Ashley HomeStore and La-Z-Boy Furniture, purchased the entirety of the 90,000-square foot site back in December 2017. The initial indication for the site was that it would be shared by both businesses, but in September an application for a sign permit featured Ashley HomeStore, La-Z-Boy Furniture and Hobby Lobby, according to a previous story.

Stasch stated that more than 200 people were interviewed for employment opportunities with Hobby Lobby, and that 80 people were hired through those interviews. Part-time associates are paid $10.45 per hour and full-time employees are paid $15.70 per hour. 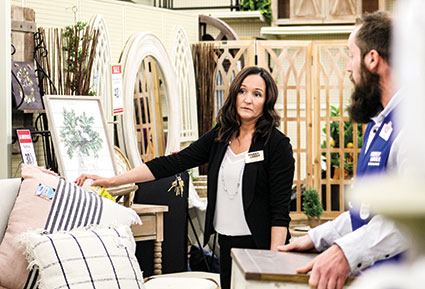 Among those new employees is Tisha Palys of Austin. She enjoyed visiting Hobby Lobby in surrounding communities, but was prompted to apply for employment with the craft store once news broke that the business was coming into town.

“Everyone is so nice, caring and understanding here,” Palys said of her experience so far. “It’s a Christian company, which is why I like it too. I think people are excited because you’re seeing Austin losing businesses, but more businesses are also coming into town.”

With the arrival of Hobby Lobby, Palys hoped that this was an indication that the business climate in Austin is improving, and that the community itself was going in a positive direction.

“I’m hoping more stores are going to come into town,” she said, “and hopefully stay open.”