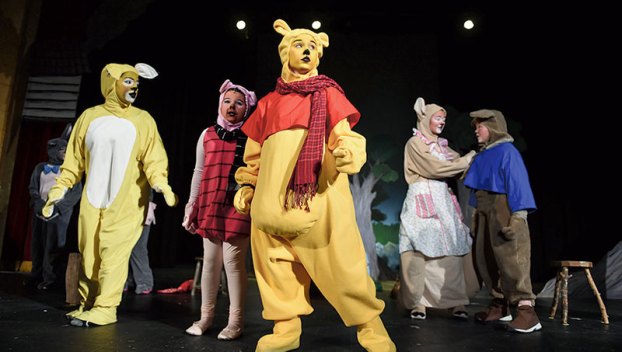 The cast of the Matchbox Childrens Theatre production of “House at Pooh Corner,” rehearses for family and friends Wednesday night at the Paramount Theatre. The show begins its offical run Friday night. Eric Johnson/photodesk@austindailyherald.com

Matchbox Children’s Theatre will perform the wonderful and heartwarming A.A. Milne classic “House at Pooh Corner” this weekend at the Historic Paramount Theatre.

Audiences of all ages will be delighted by this fast-paced adaptation that introduces the character of Tigger. His highly energetic arrival creates a big commotion in the 100-Acre Wood. Dealing with Tigger would be quite enough for Winnie the Pooh, Piglet, Kanga, Roo, Eeyore and friends to handle, but they also get some very big news from Christopher Robin, and Eeyore has a problem that needs attention.  Join the fun to see how it all works out.

This stage adaptation by Betty Knapp stays true to the much-loved Pooh and Friends characters and is produced by special arrangement with the Dramatic Publishing Company of Woodstock, Illinois.

Director Nikki Phillips is enthusiastic about the talented cast.

“We have a fantastic cast; they learned their lines really quickly and they were easy to work with,” she said.

The cast features some MCT veterans, such as Edward Dreyer, who has been in numerous MCT productions. It also features new faces, such as Rebecca, Renae and Rylan Clark. 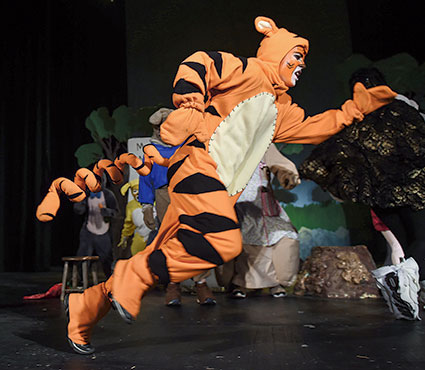 Tigger, played by Rylan Clark, comes racing onto the stage during rehearsal for “House at Pooh Corner,” which opens Friday night at the Paramount Theatre. Eric Johnson/photodesk@austindailyherald.com

The public can meet members of the cast and enjoy activities during the Community Literacy Event from 10 a.m. to noon on Saturday at the Austin Public Library.

Katie Hunerdosse shared her artistic talents on multiple levels for this production as set designer, scenic artist and make-up designer. She created a charming look for the 100-Acre Wood, assisted by Scott Anderson and Clint Phillips. Anderson is also the lighting and sound designer.

Show times for “House at Pooh Corner are 7 p.m. April 5-6 and 2 p.m. April 7 at the Paramount Theatre. Tickets are $6 for ages 14 and younger, $10 for adults and free for ages 2 and younger. Tickets are on sale now at the Austin ArtWorks Center and on-line at austinareaarts.org. They will also be available for purchase one hour before each show at the Paramount Box Office.

“This is just a really heartfelt, sincere, poignant story and it’s great for all ages,” Phillips said. “It is nice and short, so even toddlers can enjoy it. Everyone should come out and see it.”

Cast of ‘House at Pooh Corner’

Quality Pork Processors employees know it pays to be safe. So on Wednesday afternoon, they were rewarded for doing just... read more