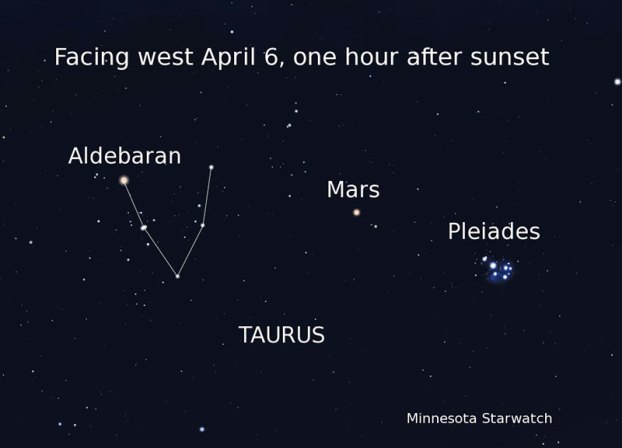 Venus takes up her place in the sky

A University of Minnesota Feature by Deane Morrison

The first day of April dawns with a crescent moon closing in on Venus just above the east-southeastern horizon.

Bathed in the sun’s foreglow, both have a rendezvous with the sun—the moon as it glides below and in front of the sun, Venus as it circles behind it—on their way to the evening sky. At new moon on April 5, the moon begins its next climb out of the sunset. But Venus won’t pass behind the sun until August, and only reappears as an evening star in late fall.

While you’re out, be sure to look low in the south-southeast for the Teapot of Sagittarius, flanked on the west by bright Jupiter and on the east by Saturn. If you need any more help identifying the planets, a bright waning moon sweeps close to Jupiter on the 23rd and Saturn on the 25th.

On the 19th, early risers may see April’s full moon hovering over the western horizon. Fullness comes at 6:12 a.m.; moonset follows less than an hour later all over the state, with earliest setting times in the more eastern locations.

During April the spring constellation Leo, the lion, prances high in the south during prime evening viewing hours. Its brightest star, Regulus, shines from the bottom of the Sickle of stars outlining the lion’s head. The Sickle resembles a backward question mark, with Regulus at the point. East of the Sickle, a triangle of stars represents Leo’s hindquarters and tail. At the tip is Denebola, whose name comes from the Arabic for “tail of the lion.”

East of Denebola shine two bright stars: brilliant Arcturus, in Bootes, the herdsman, at about the same altitude as Denebola; and Spica, in Virgo, nearer the horizon. Although Denebola is a bit dim, these three stars form an almost perfect equilateral triangle and have been called the Spring Triangle. That name has also been applied to the less regular triangle formed by Arcturus, Spica and Regulus.

In the west, the winter stars are streaming past Mars. In the first week of April, watch the Pleiades star cluster go by Mars on the right. On the left, the V-shaped Hyades star cluster, marking the face of Taurus, the bull, soon follows suit. Compare the colors of the red planet and Aldebaran, the bright and yellowish eye of the bull, as the two bodies pass.