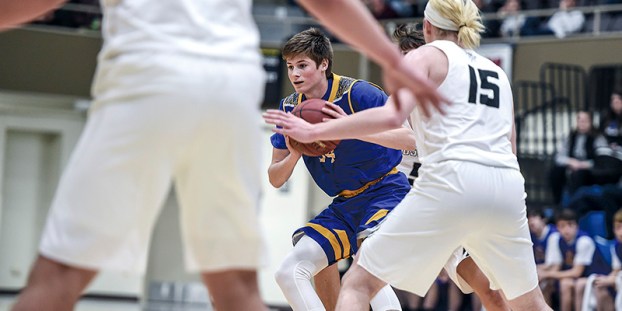 Hayfield’s Ethan Slaathaug cuts across traffic against Blooming Prairie in the first half Tuesday night during the Section 1A quarterfinals in Rochester’s Mayo Civic Center. Eric Johnson/photodesk@austindailyherald.com

ROCHESTER — Hayfield junior Patrick Towey is not afraid to take an unorthodox shot.

So when he drove to the hoop in a tie game with the season on the line, he had no problem fading back and banking the game-winner over the Blooming Prairie defense as the No. 4 seeded Vikings ousted No. 5 Blooming Prairie 50-48 in the Section 1A quarterfinals in Mayo Civic Center Tuesday.

Towey had the option to pass inside on the play, but when he had his chance, he drove and scored with three seconds left. BP (18-7 overall) didn’t get a shot off on its final possession.

“I knew I had a big defender on me, so I had to drive and fade or he would block me,” Towey said. “It banked off the glass and it went in. I’ve been practicing that shot all summer and all fall. It’s taken a long time to develop that shot.” 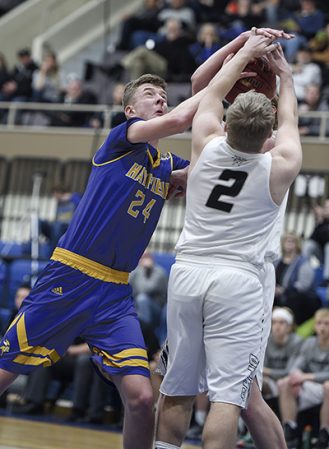 Towey, who had eight points, four rebounds and five assists, also drove and found Luke Dudycha for the game-tying hoop with a just over a minute to play.

Hayfield (24-4 overall) looked like its season might be on the brink, trailing by nine points late in the game, but senior Mason Tapp found his shot at the right time and drilled five three-pointers in a six-minute stretch to get his team back in it. Tapp had 18 of his 21 points in the second half.

“I was having a tough game and nothing was going for me. I figured it could be my last game ever and I would give it all I’ve got,” Tapp said. “I didn’t want to go out like that. I did what I had to do to win the game. When we need some buckets, I know I’ve got to go and my team knows how to get me my shots.”

BP led the game 46-37 after Kaden Thomas drove to score with four minutes left in the contest. Thomas scored all 18 of his points in the first 14 minutes of the second half, but he was held scoreless down the stretch. 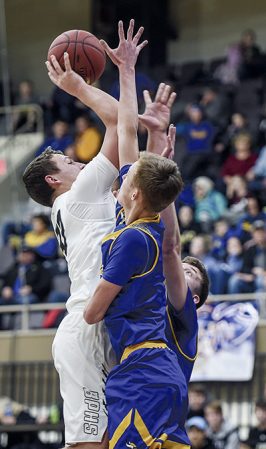 “We had to take away their inside game and if they beat us outside we could live with it, and that’s almost what happened,” Hayfield head coach Pack said. “I thought we rebounded so well.”

Pack said that his team received a much needed boost from its go-to players in Tapp and Towey down the stretch.

“You could tell Mason was a little unsure of himself for the first three quarters of the game. He was missing shots that he would normally make and our team was a little out of sync against that zone,” Pack said. “We didn’t attack it like we should’ve, but big players make big plays when they’re needed. That’s what Mason did and that’s what Patrick did as well. Survive and advance.”

Both teams struggled on offense to start the game as it took 14 minutes for a team to hit double digits after Tapp hit a three to put Hayfield up 11-5 with 4:06 left in the frame.

BP bounced back when Parker Vaith hit a pair of three-pointers to bring his team within 15-13 with two minutes left in the half and Isaac Matti responded with a three to give Hayfield an 18-13 lead at the break.

Hayfield will play No. 1 seeded Spring Grove in Mayo Civic Center at 4 p.m. on Saturday in the Section 1A semifinals. The Lions beat Houston 45-42 to advance. 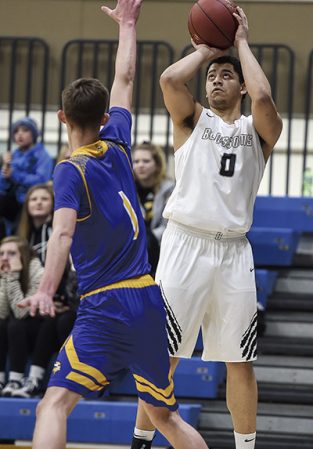 Blooming Prairie’s Trent Swenson shoots in the first half against Hayfield Tuesday night during the Section 1A quarterfinals in Rochester’s Mayo Civic Center. Eric Johnson/photodesk@austindailyherald.com

Girls basketball: Lyle-Pacelli and Goodhue are on the big stage again

The Lyle-Pacelli girls basketball team has one more hurdle if it wants to get back to the Minnesota Class A... read more