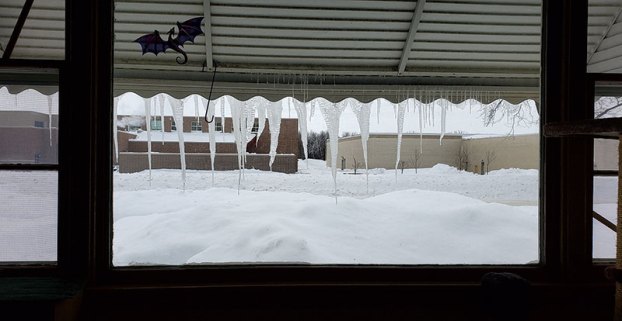 Somewhere beyond this frozen window is a fabled land called a ballpark ... and dragons apparently.

The Wide Angle: Beyond winter is baseball … and patience

This past week has really reminded us that winter still has a firm grip on the area  by literally trying to bury us.

This is no joke for any readers living outside our area including you, random person in Wilbur, Washington. Old Man Winter doesn’t even tolerate us anymore it seems.

Granted, this isn’t the first severe winter storm I’ve lived through. I once had to cover a storm during my time in South Dakota where my publisher carted me around on his snowmobile to take pictures.

Got published in a paper in Argentina, and given that readers in Argentina didn’t know who I was, save for the random Huronite who knew people there, I was quite literally an international man of mystery.

Far better than being called that weirdo with the camera.

I guess I’ve always suspected winter didn’t like us, despite my deep love of the season.

It could stand to take a time-out for a little while though. Even I could use a break at this point. I feel like a mouse in some lab experiment just by wandering around the paths of my front walk and to my garage.

My view out of our front winter is ice and snow and the occasional cat butt observing the world beyond the glass. It’s getting a tad redundant.

But I’m sure you aren’t reading this, all cozy in your kitchen or easy chair on this fine Saturday morning, coffee in hand, to read about the very weather that hates us so much. So I’m going to give my small cadre of readers that which they desire. Unless you desire spring and summer, of which I guess you’ll just have to wait and be disappointed in the meantime. Sorry, life is hard.

Instead, I’m going to talk about another disappointment that frustrates many of us most every day — the Minnesota Twins.

Yes, baseball is back,which also means another season of me and Jason Baskin arguing — good-naturally — of the apparent worth of Byron Buxton. For the record, lots of guys can run fast, but that speed doesn’t do much if he can’t hit the ball,  and his defense only helps when the ball is in his immediate area.

I have to be honest though, this time around I haven’t really kept up with what the Twins have done this year. I know they signed a few people I don’t recognize, gave Max Keppler and Jose Polanco a couple good paydays, and Miguel Sano is being … Miguel Sano.

Listen, I don’t claim logic necessarily, and it’s not even why you read this. Some of the time I manage logic, but what I do know … is not much.

See this is what the Twins do to a man. Often times we don’t know if we’re coming or going,which, also seems like what the Twins have been doing over the past few years.

Maybe it’s the larger issue of Minnesota professional sports. A symptom of a larger illness. Minnesota sports in general.

There’s been a lot of promise over the years and not much to show for it. The Vikings wrapped up a subpar year where many were talking Super Bowl, the Wild are doing … something.

The Timberwolves are sailing along at somewhat of an expected level, but still remain the Timberwolves, and the Minnesota Lynx are in their offseason, so in some respects they’re the most successful because at least they aren’t losing right now and of course they have won championship, so automatically they are more relevant than the others in a lot of ways.

However, the Twins in some ways represent more than just baseball.They are representing what people’s current lives aren’t. A world devoid of snow and ice. A world of summer warmth, breezes and getting out to the ballpark.

Of course this is Minnesota so let’s not rule out that the Twins are playing their first few games in 20 degree weather and snow flurries, which will make them harder to watch if they behave like the Minnesota Twins we know and tolerate.

Like every other year, the Twins don’t have that nationally-feared player. Teams were aware of the threat of Joe Mauer, but the fan-favorite wasn’t the force he was earlier in his career, like many players, and he retired last year.

We’re back to the Twins we have gotten used to, which isn’t a bad thing.

Remember, the Twins do have two titles, won largely with a roster that relied on all nine players hitting that field in a night rather than one superstar that hit the ball a long way or runs real fast.

Yes, we had Kirby Puckett in those years, but those two Minnesota Twins teams, in 1987 and 1991, were teams built on doing the small things right. They weren’t flashy, but rather were the blue-collar versions of a  Major League Baseball team. They came in, punched the time-clock and went to work.

And if I’m to be honest yet again, these Twins are kind of resembling that a little. Not many known names that stand out to everybody, but solid if they do their jobs.

I’m not saying that will happen, I’m just saying there is a chance.

Just like there is a chance we’ll see the grass again. At this point, I’m not even sure I’m going to see my garden again, but Bigfoot hasn’t been disproven yet, so there is hope.

Did you know that trillions of bacteria live in the body? Most are helpful; some aren’t.  The term “microbiome” describes... read more