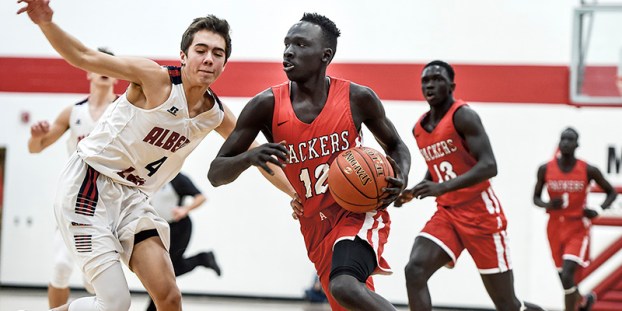 Austin’s Ngor Deng breaks to the hoop off the fastbreak against Albert Lea i the first half Friday night in Packer Gym. Eric Johnson/photodesk@austindailyherald.com

Share of the Crown: Packers grab another Big Nine title

The Packer boys basketball team finished off the final gauntlet of the regular season in a situation that’s becoming very familiar to them — as Big Nine champs.

Austin finished off Albert Lea by a score of 82-51 in Packer Gym Friday to clinch a share of the Big Nine title for the second straight year and for the fifth time in the past eight years.

Austin (21-5 overall, 19-3 Big Nine), which will share the Big Nine title with Mankato East, went 9-1 over the last 16 days, with  just two practices over that stretch.

The Packers were able to grow throughout this season with a lineup that had very little varsity experience last season. 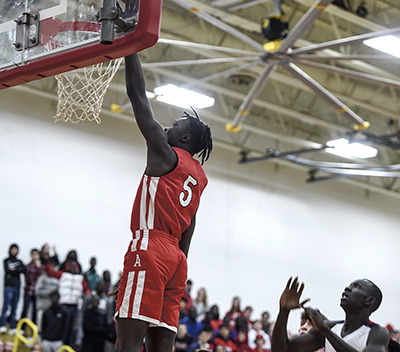 “At the beginning of the year if we said we could have a 20-win season and be Big Nine champs again, I would’ve taken it in a heartbeat,” Austin head coach Kris Fadness said. “I’m very proud of these guys. It’s been a really goofy season. It’s been a weird season. We’ve got good athletes and good kids who work hard and are passionate about basketball. I’m happy for them.”

The Tigers (3-22 overall, 2-20 Big Nine) led 13-12 early on and they were as close as 57-44 with 10 minutes left in the game, but Austin’s defense eventually wore them out. The Packers forced 32 turnovers, which led to a lot of easy transition hoops.

Austin senior Medi Obang finished with 16 points, three assists and three rebounds as he continues to play more of a facilitator role. 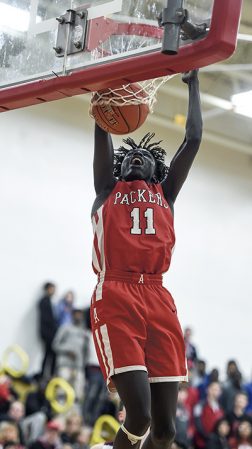 Austin’s Agwa Nywesh throws down a two-handed dunk in the first half against Albert Lea Friday night in Packer Gym. Eric Johnson/photodesk@austindailyherald.com

“I feel like it helps us a lot (when I pass),” Obang said. “I tell them to look for their shot. I’m trying to be a leader out there.”

Dongrin Deng racked up 14 points, six rebounds and three assists for Austin and Ngor Deng added 11 points and five steals. The Packers will now likely have eight days until they open the Section 1AAA Tournament in Civic Center on March 9.

Dongrin said that rest will be crucial. 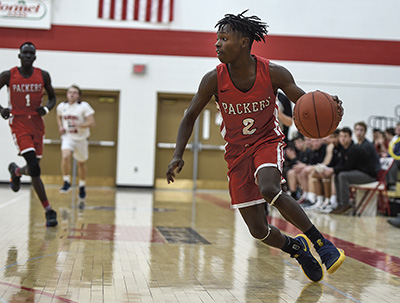 Blue Devils get past Northland