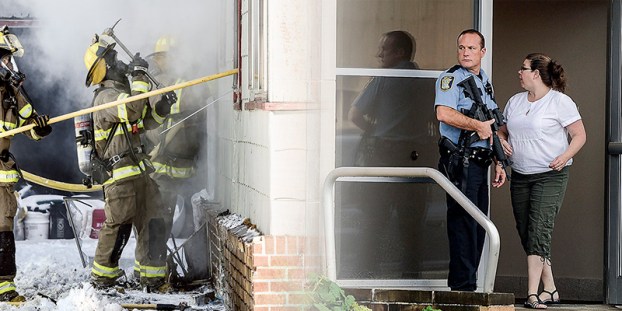 In every community, emergency personnel are a necessity and in demand. But despite this, the Austin Police and Fire Departments have seen a decrease in applicants in recent years.

“Five or six years ago we were getting 60 or 70 applications,” said Austin Police Chief David McKichan. “There is a process we use to grade and score applications to try to get to a manageable number. What we’ve seen is each year we look for applications and look to do testing, our numbers have dropped into the 30s, into the 20s, and now we’re in the teens.”

The APD is allotted for 34 officers and currently has 32. McKichan said that number will change soon. 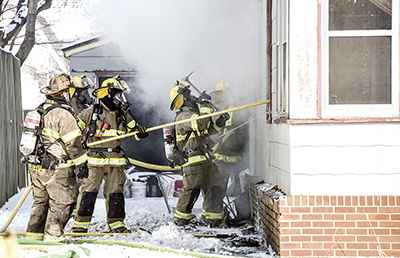 Austin firefighters work at the side of a building as they fight a house fire. Herald fileel photo

“We’re two positions short of what we’re allocated to have,” he said. “We do have another retirement of one of our lieutenants coming up in May that will put us three short of our allocation. I’m also aware of at least two of our officers being backgrounded by other agencies within the state and they may or may not be hired. If they were offered positions and accepted them, that would put us another two down. The potential there is in May or early June, we may be five officers below our allotment. When we’re looking at for sure replacing up to three people this year, potentially up to five, and our list only starts with 15, it does create some concern for us.”

The AFD currently has nine full-time staff and 20 part-time staff, with one in training. Volunteers (non-career) are paid, starting at minimum wage for training which then increases to $14.50 per hour.

“Long term, if people stick with us, there is a really nice pension that is contributed to at the end of every year that continues to build,” McCoy said. “At seven years, you’re 48 percent vested, and your vesting continues to increase until you hit 20 years, when you’re fully vested. Those that stay around do have a nice pension they can cash out at age 50.”

“It’s not unique to Austin, “McCoy said. “People are busy. Younger people don’t seem to have the time. The fire service isn’t alone in not seeing the number of people volunteering.”

Like the AFD, the APD’s situation is also not unique.

“Our issues with the size of our hiring pools are being repeated throughout the state,” McKichan said. “We are not the only agency to see this precipitous drop in candidates, and this means less supply and high demand. You get in a very competitive environment to get the candidates to come to your city and apply and, once they’re here, you have to try to retain them.”

The city has been in the process of trying to address the issue of recruiting and retaining employees in all departments via a compensation and classification study, which is currently in progress. The purpose of the study is to see where Austin stands as an employer and address how it can stay competitive against other cities. McKichan hopes the study will aid the APD with these issues. 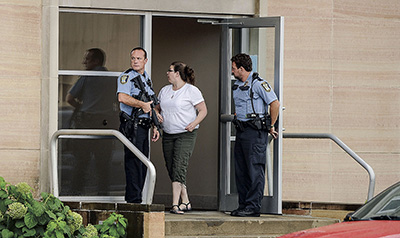 Austin Police officers take up positions at the north door of the Law Enforcement Center as a woman leaves the building as police and Mower County deputies were searching the building, looking for a possible active shooter in this file photo. Herald file photo

Another issue facing both departments is not just attracting applicants, but candidates who are qualified to fill the positions.

“We have, unfortunately, had some candidates that have not made it through their probationary period with us,” McKichan said. “That’s something we strive not to have happen, but when you’re looking for a candidate that’s going to fit with your department and with your community for a 30-year commitment, there are a lot of decisions that go into it. Some of the candidates that apply to us may be better suited to start in a smaller department, gaining some experience and coming back. We are a very busy agency; there is a lot going on in the city of Austin and you are expected to be a professional.”

“Sometimes getting experienced candidates is life experience and experience in a different profession,” he added. “A lot of those skills you had to learn can apply to what we’re doing.”

“Some of the applicants do not fit with what we deem as acceptable candidates,” McCoy said. “It’s hard because we’re in people’s homes without supervision and there is a lot of trust given the fire service. We have to have people we know we can trust in there and the public can trust. We look for the best people possible.”

But one of the biggest issues facing both departments is a general lack of interest from the younger generation.

“Kids are going into a bevy of different jobs and they’re not choosing law enforcement the way they have historically,” McKichan said. “Part of that goes back to perception; the perception of the stresses of the job and the potential for media exposure. Police agencies have to be much more mindful of the need to have young people in high school be interested in a career with us. We didn’t have to do that a decade ago. We have to help that generation understand the benefit of having law enforcement in their community.”

“Our greatest recruiting tool so far has been individuals inside the department, talking to their friends, talking to their relatives and getting the word out that way,” McCoy said. “When we do have open applications, we have a lot of interest, but when it comes time to put that application in, they just don’t do it. It’s frustrating knowing that interest is there, but that final step of putting that application in and going through the interview just doesn’t happen. We advertise in the paper and the website and Facebook that we’re hiring. The million-dollar question in the fire service is how do we get those people. Unfortunately the interest just isn’t there.”

McKichan and McCoy both agree that more exposure would benefit their respective departments.

“We have young folks come over a couple of times a year,” McKichan said, citing the high school mentoring program and Austin Aspires as partners in creating programs that put young people in touch with the APD. “They interact with us, tour the building and we talk about what we do, and what our career is. I think having that ability to talk and reach out to those young people has been a huge boon for us.”

“If I could change one thing, it would be to get those who may be interested in here and get them around firefighters and let them sit-down to ask questions and see what we do and realize what a close-knit group we have,” McCoy said. “Our full and part-time people get along extremely well and that’s not something that every combination department enjoys. I think when people get through the door and get hired they really like it. It’s something new and something unknown, but if we can get you in here, I think you’ll love it.”

Generosities that won’t be forgotten: Karen Zech sees the results of Pay It Forward on her home

Karen Zech had an idea of what Pay It Forward was all about, but as she walked into her newly... read more