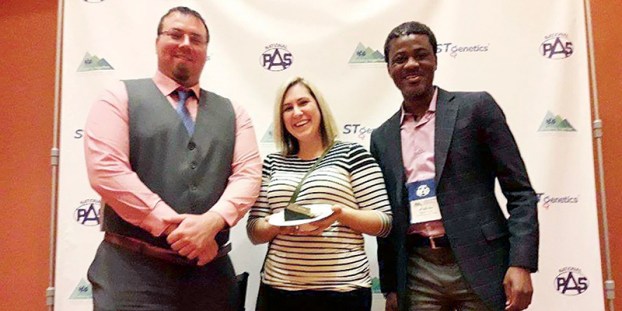 More than 600 career-ready professional agricultural students, their collegiate advisors and industry representatives gathered in Loveland, Colorado, for three days of national-level competition, workshops to develop their networking skills as well as going on industry tours.

“I commend my students for taking the initiative and involvement to compete in Minnesota and to compete at the national level,” said Nick Schiltz, instructor at the Center for Ag and Food Science and advisor to the club. “They’re continuing to pave the way for future agricultural science majors.”

Three students from Riverland’s Agricultural and Food Science Technology Club attended the national conference, including Aaron Wagner, the club’s vice president, Leah Tidemann and Modeste Zinzindohoue. Riverland was able to send students to the national conference largely by sponsors such as the Freeborn County Corn and Soybean Growers Association and Dr. Jerry Nelson.

“It was a really great event,” Wagner said. “It was a wonderful opportunity for us to compete and to represent our school. It was a great event to help refining our skills for the ag field.”

Among Riverland’s Ag Science Club members, Tidemann, a senior, placed third in the nation for an employment interview and resume competition for forestry and natural resources. She was caught off guard by her ranking at the national competition.

“The guy who was interviewing me didn’t seem impressed with me at all,” Tidemann said. “I wasn’t able to stay for the results because of a family emergency, and I just requested my placing via email.”

Tidemann explained that from the experiences of networking at the national conference, as well as her own experiences with Riverland’s ag and food science program, she learned more about the industry and felt better prepared. In fact, she scored a job within her career field and starts on April 1, before graduating from Riverland in May. “It’s really exciting for me,” she added.

Schiltz expressed his gratitude for the college in investing into the future of agricultural science students, and hope to have similar experiences made available for the following year.

“We want to thank those people who help our ag science majors directly apply their education,” he said. “We’re preparing them for their future ag science careers.”