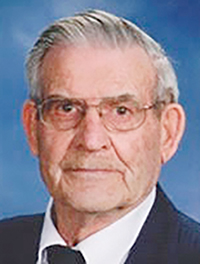 Raymond married Viola Karges on Nov. 23, 1944, in Lake City. In 1962, Ray and Viola moved to Dexter, Minnesota, where they farmed north of town until 1976, when they sold the farm and moved into Dexter. In 1984, they moved to Brownsdale, Minnesota, where Ray worked for Don Akkerman, Countryside Farm Supply, and the Brownsdale Elevator. Ray and Viola celebrated their 65th wedding anniversary in November 2009.

A private family service will be held later in the spring. Czaplewski Family Funeral Home in Hayfield, Minnesota, is assisting with arrangements.