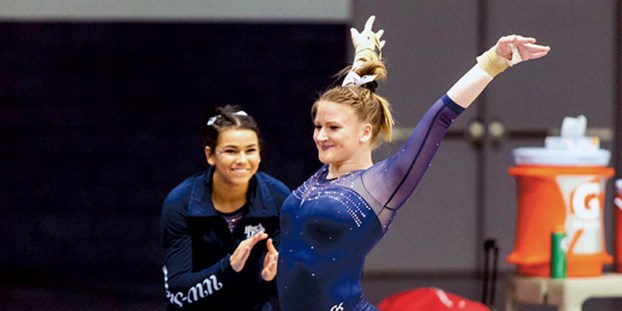 Austin grad Maddie Mullenbach has competed in some big meets in her gymnastics career and now she can say she’s competed at the national level.

“The season was definitely very memorable,” Mullenbach said. “I felt like the puzzle pieces came together throughout the year. Each of us had a different meaning to the team and all of them were important. We all added up.” 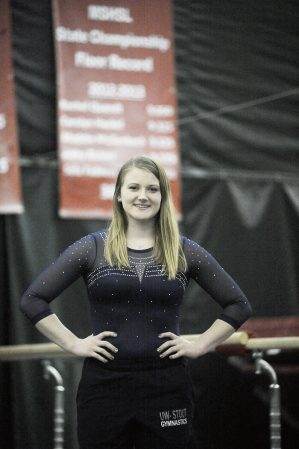 Austin grad Maddie Mullenbach recently competed in the NGCA meet with UW-Stout. The Blue Devils finished in second place at the national meet, which was their best finish in school history. Rocky Hulne/sports@austindailyherald.com

Mullenbach won a Minnesota Class A all-around state title in her time with the Packers and she is certainly used to competing in high pressure meets. The mood was a little more laid back at nationals, but the intensity in the competition remained.

“High school state gymnastics and college national gymnastics were kind of the same, but they also felt different,” Mullenbach said. “I was almost more relaxed going into nationals than the state meet, but the whole aspect was the same. It was energetic and fun.”

After a relatively injury-free career in high school gymnastics, Mullenbach has battled a few setbacks, limiting her to competing in just vault and floor. While she does miss being an all-arounder at times, Mullenbach knows it’s what is best for her.

“When I was in Austin I didn’t really struggle with injuries, but once I hit college my body was overwhelmed or something,” Mullenbach said. “There’s been some injuries, but other than that, I’ve had it pretty good. I can’t complain. I’m very proud to be a part of the 19 girls that we had on the team this year and I hope to come back next year and do the same thing.”

Competing in gymnastics has helped Mullenbach thrive at Stout in the classroom and as a person. She’s majoring in environmental science and she’s had plenty of role models on the team with her.

“Several of the girls on the team are in the medical field and they’re very successful. That motivates me to being successful,” Mullenbach said. “When I first got here, I was extremely shy, but then I remembered my teammates have the same interest and we had something similar to talk about.”

Mullenbach is hoping to continue competing for the Blue Devils in the future and she felt like the team made a big impact this season.

“I felt like our name was out there a lot more this year,” Mullenbach said. “We worked super hard to put a front out there for people who may have not known a lot about certain athletics (on the campus).” 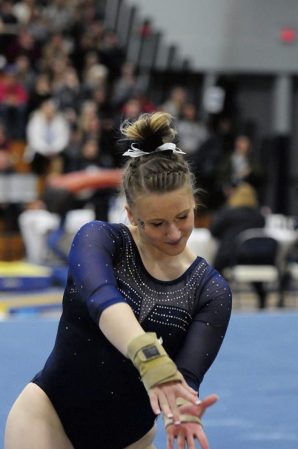