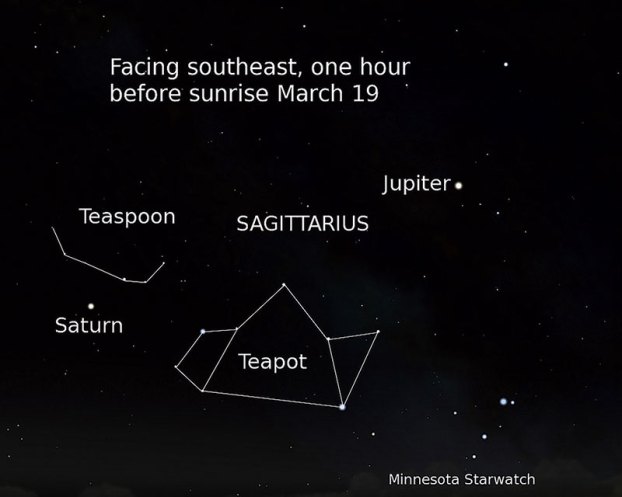 Hail to the kings: Jupiter, Saturn greet the earlier risers

March mornings glow with the light of Jupiter and Saturn, both well up in the southeast to south in the predawn sky. The two planets flank the Teapot of Sagittarius, with Jupiter the higher and brighter planet. Above Saturn hangs the little Teaspoon of stars. Far to the lower left of Saturn, Venus drifts toward the sun’s foreglow.

On the 1st, a thick crescent moon hangs close to Saturn. The next morning, the moon and Venus make a pretty pair.

When daylight saving time returns at 2 a.m. March 10, it makes life temporarily easier for early-bird starwatchers. The biggest difference comes at the outset; on the morning of the switchover, the sun rises nearly an hour later than the day before. This advantage dwindles away in just a month, so enjoy it while you can.

In the evening sky, Mars holds its own in the west. Meanwhile, the bright winter constellations close in on the red planet as they begin their descent to the horizon. On the 31st, Mars will be lined up with two bright stars: Aldebaran, the eye of Taurus, the bull; and Betelgeuse, Orion’s right shoulder. Also that night, the lovely Pleiades star cluster passes close to Mars.

March’s full moon arrives at 8:43 p.m. on the 20th. Its closeness to Earth qualifies it as another “supermoon,” and it will rise, round and lovely, as sunset draws near.

This full moon comes just a few hours into spring, which begins with the vernal equinox at 4:58 p.m. on the 20th. At that moment, Earth’s axis will tilt neither toward nor away from the sun, and our planet will be lighted from pole to pole.

During the last 10 days of the month, look for the elusive zodiacal light an hour or so after sunset. This time of year, it appears as a faint finger of light pointing up from the sunset horizon along the sun’s path, and is visible only in dark skies with no interfering moon. Its soft shimmer comes from sunlight reflecting off dust in the plane of the solar system.

Play on Hormel strike to premiere at Children’s Theatre Company

The Children’s Theatre Company in the Twin Cities announced its 2019-2020 season lineup, and one of the productions may hit... read more