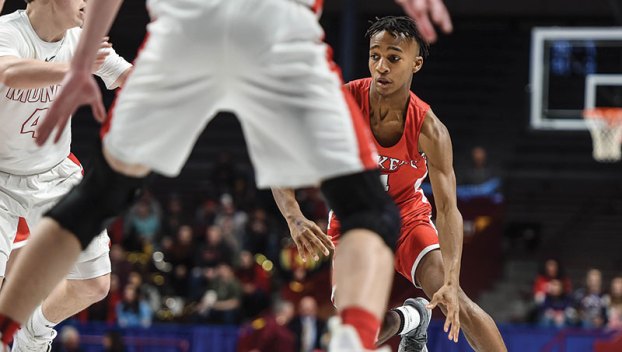 Austin’s Pierre Lilly with the drive in the second half Wednesday during the Minnesota Class AAA Boys Basketball State Tournament quarterfinals at Williams Arena. Photos by Eric Johnson/photodesk@austindailyherald.com

Going on the attack: Packers take to the offensive in first-round win

Obang came out firing as he helped lead the Packers to a 68-52 win over Monticello in the state quarterfinals in Williams Arena Wednesday.

“It was a really big game for us to win,” Obang said. “I feel like Monticello is a good team. We had to stop settling for threes and start attacking the basket.” 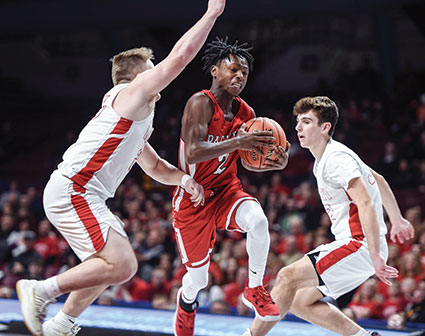 Austin’s LaHenry Gills drives through pressure during the first half.

Austin had six players score at least six points in the win as the team’s depth kicked in.

“It was a weird game,” Austin head coach Kris Fadness said. “It just seemed like it didn’t have a lot of flow and then it got really physical in the second half. That’s what you have to do, if you’re Monticello.”

The Packers will take on Waseca (29-1 overall) in the state semifinals at 2 p.m. today at Target Center.

Austin has competed in six of the last eight state tournaments and it is now 5-1 overall in quarterfinal games during that stretch.

The Packers have taken second place in state three times over the last decade, but  finished fourth last season.

Read more on the Packers win here: Defense leads the way: Packers move on in Class AAA state with win over Monticello

Defense leads the way: Packers move on in Class AAA state with win over Monticello

MINNEAPOLIS — The Packers struggled to find their shooting mark, but it didn’t matter as their defensive pressure set the... read more