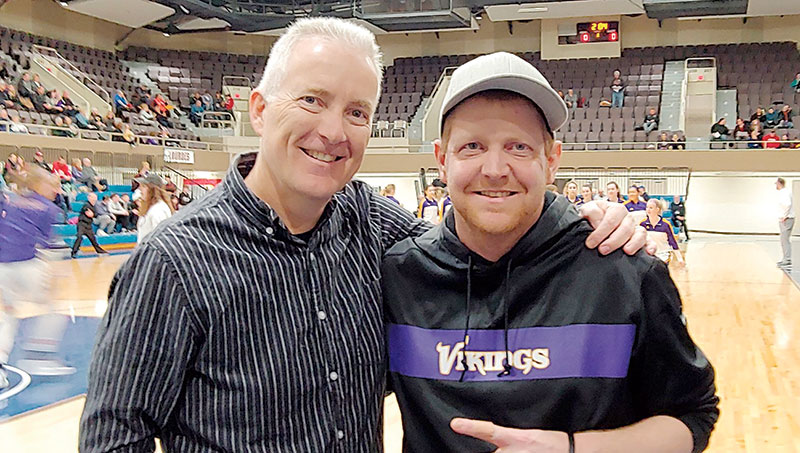 Chris Douglas, left, of Rochester and Chad Corey pose for a picture together. Douglas was found to be a match for Corey and is donating his kidney on April 29. Photo provided

Months after putting out the word that he needed to find a kidney donor, Chad Corey received a phone call at the end of February that changed his life.

“Chris called me and asked, ‘How would you like a new kidney?’” the Austin native recalled of that fateful morning on Feb. 28. “It still hasn’t fully sunk in, yet. It’s not everyday that someone tells you that they can help by giving you one of their organs.”

Chris Douglas of Rochester was an acquaintance of Corey’s through their interactions at sporting events that both men covered for their respective jobs. The two developed a friendship over their love for sports and photography. However, time had passed and Corey hadn’t run into Douglas for a while until recently.

“That’s when he told me that he was gonna get an evaluation for a transplant for me,” Corey said. “I was surprised. I didn’t even know he was going to get himself evaluated. He told me he was going to keep in touch and let me know how things go.”

Back in September 2018, the Austin Daily Herald interviewed Corey about his journey with kidney disease. The Austin native, who now resides in Rochester, has been struggling with kidney issues since he was a child. Four years ago, Corey discovered he had stage three kidney disease, and later found out his kidney was failing and entered stage four. Since then, Corey has been searching for a kidney donor, as well as continuing dialysis treatments at Mayo Clinic, according to a previous story.

After getting the news that Douglas was a match, Corey felt himself slowly come to the realization that he’ll be able to take back control of his body. That means no more dialysis treatments and the ability to have a healthier quality of life with the transplant.

“It’s still not done and over with,” he said. “I have to go to the doctor and take medication and make sure there’s no rejection of the organ. I’m still not out of the woods yet, but still, it’s a great step toward getting my life back and not dealing with dialysis, which is very exhausting. Having that weight lifted off of my shoulders is amazing.”

The transplant surgery is scheduled for April 29. Even after the surgery, Corey will still need to continue getting checkups and have blood work done. However, that’s minor in comparison to what he has been experiencing the last few months in terms of treatment.

“I’m more looking forward to being free of (dialysis),” he said. “I can control my body and be back in control. Having a healthy functioning kidney on its own is gonna be a huge thing for me. I’m obviously very fortunate to have people go out of their way and organize all of this for me. This is a part of their body, and it’s very humbling.”

Ironically, the call came from Douglas came on the same day Corey’s friends posted his search for a kidney donor on billboards throughout Rochester. Despite Corey’s donor coming through, his friends decided to leave the billboards up for people to see.

“They thought they weren’t gonna do it, but then after thinking about it, they kept it up,” Corey said. “Learning about organ donation is important. There’s more than 110,000 people in Rochester, and if it’ll help one person to learn the process of organ donation, then keeping it up isn’t a bad thing.”

For now, Corey looks forward to the transplant procedure and to his new kidney. He has Douglas to thank for that.

“It still hasn’t sunk in,” he said. “I’m sure when it’s April, the feelings will be more of ‘it’s really gonna happen.’ This is something really special. This is incredible.”