Generosities that won’t be forgotten: Karen Zech sees the results of Pay It Forward on her home 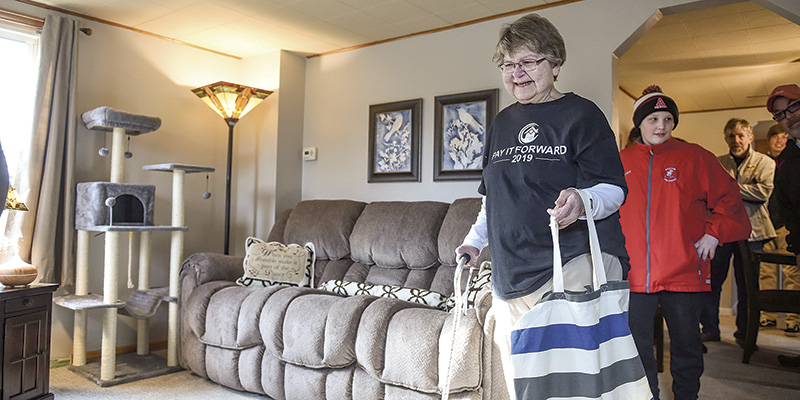 Karen Zech smiles as she walks into her refurbished living room, done through the Pay It Forward program Friday evening. Eric Johnson/photodesk@austindailyherald.com

Karen Zech had an idea of what Pay It Forward was all about, but as she walked into her newly refurbished home in northwest Austin for the big reveal Friday evening it was safe to say it went beyond expectations.

“I’m breathless,” Zech said after examining her living room, complete with new furniture for both her and her two cats. “ This is just … it’s incredible. Just over the top.”

As she toured her home, Zech, who suffers from rheumatoid arthritis, alternated between tears and laughter and sometimes combining the two. 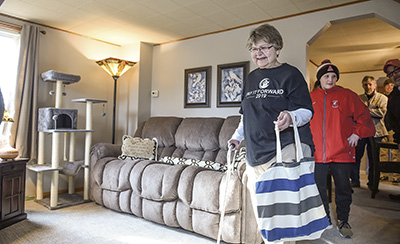 Karen Zech smiles as she walks into her refurbished living room, done through the Pay It Forward program Friday evening. Eric Johnson/photodesk@austindailyherald.com

Gina Grundmeier escorted Zech through home that now features, among so many other things, a redone bathroom, new carpets, new countertop in the kitchen and new furnace and air conditioner.

It was an entire package of giving back and it had Zech stunned throughout her walk.

Zech found out she was the recipient of this year’s Pay It Forward Bathroom Makeover while having coffee with her friend Kris Graff one morning.

“Gina said on the air ‘I know they’re having coffee,’” Graff said back in February, after Zech was chosen. “Karen looked over at me and the tears started flowing. It was very, very emotional.”

Going into the “adventure,” Zech said she had one hope above all others, especially in the face of the arthritis that’s been progressing faster than she would like.

“To have a safe, accessible bathroom — that was the goal,” she said. “I kind of figured they would do a few other things, but this is way, way beyond my wildest dreams.” 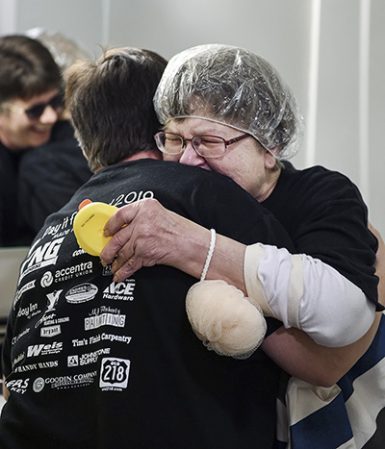 Going from laughter to tears, Karen Zech hugs Gina Grundmeier after seeing her new bathroom for the first time Friday evening. Portions of her house were refurbished through Pay It Forward. Eric Johnson/photodesk@austindailyherald.com

There are also some other new gadgets to help Zech including remote controls for things like lights and electronics throughout the house.

Grundmeier said that picking Zech for Pay It Forward this year was giving back in another way aside from what the program does.

“From talking to Kris and everybody else we’ve heard from, Karen is one of those people that helps everybody and anybody,” Grundmeier said. 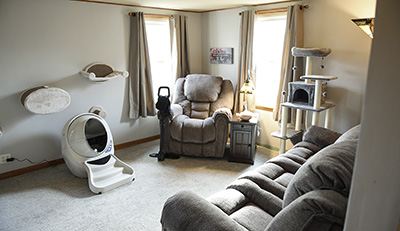 Karen Zech’s new living room includes new furniture for both her and her cats. Eric Johnson/photodesk@austindailyherald.com

“It’s really been an adventure,” Zech said. “I’ve asked myself thousands of times, ‘why me?’ These generosities will never be forgotten.”

— Hannah Yang contributed to this story.