Dewey was born on Sept. 13, 1927, in Austin to Clarence and Hazel (Olson) Hanson. He graduated from Austin High School in 1946. On Sept. 11, 1946, Dewey enlisted into the United States Army. He was stationed in Korea, serving as a medical supply sergeant until Jan. 29, 1948, when he was honorably discharged as a decorated World War II veteran. He then attended the Minnesota School of Business in Minneapolis, graduating in 1949. On July 10, 1949, Dewey was united in marriage to Winifred Warfield at St. Olaf Lutheran Church in Austin. They made their home in 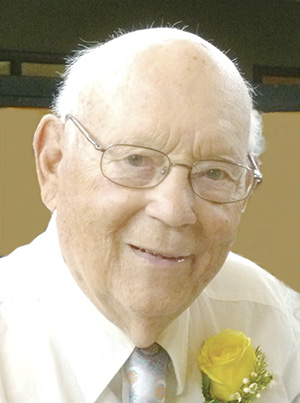 Austin and raised five sons. Dewey, along with his brother, Carleton, owned and operated the Champion Oil Company for 35 years. He also served as a Mower County Commissioner for 16 years. After retiring, Dewey worked for the Mower County Corrections Department, transporting juveniles and working on drug evaluations. He served as a guardian/conservator for Mower County as well, and continued to serve on the Planning Commission and Board of Adjustments. Dewey liked to travel, especially to western parts of the United States, and he and Winnie enjoyed many winter trips to Arizona. In addition, he loved music, could play several instruments, and performed in bands for more than 70 years! He played the saxophone and clarinet in dance bands and was an original member of the Cedar River All Stars/Austin Swing Band. Over the years, he also played with the Alley Katz polka band, the Curt Wilkinson Trio, and the Jack Schultz Orchestra, travelling the country to various engagements until he was 90 years old! Dewey was proud to be a charter member of Our Savior’s Lutheran Church in Austin, where he was actively involved. Furthermore, he was a 60-year member of Fidelity Lodge 39, a member of American Legion Post 91, a life-long member of VFW Post 1216, and he served in the VFW Color Guard.

Dewey and Winnie were blessed to celebrate their 65th wedding anniversary on July 10, 2014, and were surrounded by many friends and family members at a wonderful party on July 19, 2014, at Our Savior’s Lutheran Church. It was a very joyous occasion; Dewey and Winnie were touched by the great turnout and outpouring of love. During their long marriage, they not only raised five sons, but also loved and cared for many animals. Mandy and Buster were two of their special dogs, and their final beloved pet, Ginger kitty, was adopted from the Mower County Humane Society several years ago. “Gingy” was extremely special to them, brought them immense joy and happiness, and was a great comfort to Dewey after Winne’s death. Ginger and Dewey were constant companions until Ginger’s sad passing in December of 2018. He missed her and Winnie dearly and was looking forward to being reunited with “his girls” in Heaven.

Funeral services will be held at 1 p.m. on Monday, March 4, 2019, at Our Savior’s Lutheran Church in Austin with the Rev. Joy Bussert officiating. Visitation will be held from 4-7 p.m. on Sunday, March 3, 2019, at Worlein Funeral Home in Austin and will continue for one hour prior to the funeral service on Monday at Our Savior’s Lutheran Church. Interment will immediately follow that funeral at Oakwood Cemetery in Austin. Military honors will be presented by American Legion Post 91 and VFW Post 1216. Services are pre-arranged and performed by Worlein Funeral Home of Austin. Condolences may be expressed to the family online at www.worlein.com.