Danny P. Rasmussen, 72, of rural Rose Creek, Minnesota, passed away on Sunday, March 10, 2019, at home surrounded by his family. 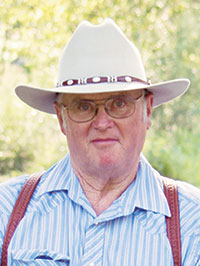 Danny Patrick was born was born March 20, 1946, in Austin, Minnesota, to Estel “Pat” and Dolores (Leeper) Rasmussen. Dan graduated from Elkton High School with the Class of 1964 and went on to study at Austin Area Vocational-Technical (Riverland Community College). Following his studies, he served an internship with the John Deere dealer in Winona, Minnesota. In August 1966, Dan entered military service in the U.S. Army during the Vietnam War. He served a tour in Vietnam before his honorable discharge in August 1968. He returned home to farm with his dad. In 1969, began he began farming on his own, and in 1973 attended college in Oklahoma to study farrier science.

Dan was united in marriage to LuAnn “Anne” Marie Peterson on Sept. 20, 1975, at Grand Meadow Lutheran Church. They raised their family and have resided on their Marshall Township farm, “Iron Rose,” for almost 45 years. In addition to farming, Dan trained horses, logged with horses, and for a short time served as a relief police officer in Grand Meadow, Minnesota. He continued to work as a farrier and trimmed cattle until the summer of 2017. He and Annie enjoyed trail riding and camping with their horses and working cattle in Nebraska when they could. Dan was a lifelong member of St. John’s Lutheran Church in Elkton, Minnesota, where he served as a member on the cemetery board and past president of the church council. He was a long time member of Adams American Legion Post 146 and chapter president of “Cowboys for Christ.”

A memorial service will be held 11 a.m. on Friday, March 15, 2019, at St. John’s Lutheran Church in Elkton with the Rev. Liz Erickson officiating. Adams American Legion Post 146 will conduct military rites following the service. Visitation will be from 4-7 p.m. on Thursday, March 14, 2019, at the Adams Funeral Home and will continue for one hour prior to the service on Friday at church. Interment will be at a later date in the church cemetery. Memorials in Danny’s memory are preferred to Disabled American Veterans, American Cancer Society or donor’s choice.

Vikings down No. 3 Bears in a playoff primer